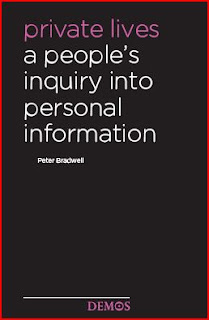 Hot off the (real and virtual) press is a good read from those clever folks at Demos.

Demos is a London-based think tank which has accommodated thinkers who are capable of clearing their heads and thinking new thoughts. Which is not easy when the builders have been busy tearing down or noisily refurbishing the plots adjacent to their offices for the past four years, non-stop. So now they have a new office block directly in front of them. And a new office building immediately to their right. And, an almost-ready office block immediately behind them. If you were a conspiracy theorist you would assume that the building work has been sponsored by other think tanks who are jealous of its reputation - perhaps the Institute of Economic Affairs, the Adam Smith Institute, or even Chatham House. Probably not, though.

One of their number, Peter Bradwell, has just written up the results of their people’s enquiry into personal information. What’s all that about? Well, as Peter explains:

It’s “about what the public thinks about how personal information is used. It sets out the opinions and ideas expressed by 40 people following a month-long, deliberative ‘people’s inquiry’. Over 13 hours they were informed by a series of expert presentations, and then given the time and space to reflect, debate and decide what they thought about the use of communications data, targeted advertising and the use of medical information.”

And what happened during those 13 hours? Again, in Peter’s words, “they heard from expert representatives from the NHS, search engines, mobile phone companies, from lawyers and from consumer advocates. The aim was to facilitate an informed discussion with participants considering a range of opinions on the risks, benefits, opportunities and challenges of the phenomenal explosion in the means to gather and use personal information.”

And I have to say the people they heard from were good. From what I was told, they told it straight. They weren’t there just to “sell” one particular side of the story. What a waste of time on everyone’s behalf that would have been.

Well, continued Peter: “Across our three topics inquiry members were asked to consider the legitimacy of personal information use; the extent to which they can control it; and which ‘calls to action’ they demanded regulators, government and businesses listen to.”

And the result – cummon, let’s cut to the chase. What do they really think then, Peter?

“The people’s inquiry indicated that people are not running scared of the database society, but at the same time they care deeply about its governance. They recognise that there are legitimate ways to gather and use information. But over the course of the inquiry they came to require more convincing that the aspirations driving the use of personal information were realistic, or that information would only be used to pursue the intended purposes.”

Oh, that doesn’t sound too welcome for those folks over at BigBrotherWatch, then, who are keen to smash the database state. But what does Peter say that might just accord with their agenda?

“Our participants offer a clear call for more meaningful ways to give their consent and for far stronger regulation to hold data handlers to their word. For example, they want those who mishandle data to be named and shamed, they would like to see regulators develop a kite-marking scheme to help improve awareness of good practice and they want consumers harmed by the misuse or illicit sale of information to be compensated. The findings serve as an insight into the informed attitudes of people who are affected by information use. But equally, they serve as a demonstration of one mechanism for ensuring that the development of personal information use is legitimate and democratic.”

That’s better. So it’s not all good news, after all. Perhaps we should sell some of our shares in the database state, just to be on the safe side. We don’t want to be too heavy in that area when it all goes pear-shaped again.

But it is quite a nuanced report. And since the main text is only spread over 90 pocket sized pages, if I were you, I would better start reading it. You can purchase the paperback for £10, or you can downnload it as a .pdf file free of charge. My, I love .pdf files!!