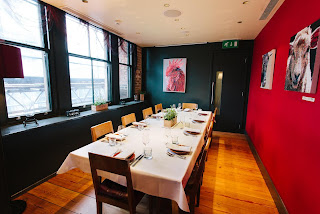 A choice selection of Britain’s data protection elite assembled at Smiths of Smithfield last night, to enjoy the most generous hospitality of their wonderful hosts, our chums at Promontory.

After a hard day’s data protecting, Smithfield really was the place to be. In the private room, the semi-private room and elsewhere within the establishment, earnest discussions on the issues of the day continued into the small hours. In one corner of the restaurant (pictured), and in the absence of hard news about the fate of the General Data Protection Regulation, opinions were shared about likely scenarios.

One person surmised that, given the Commission’s commitment to do something in the current European Parliamentary term, then some sort of text would emerge. But, given the frantic atmosphere in which last minute discussions and political compromises were likely to be made, the final text would not achieve much. And, when examined in slow time and in detail by the usual experts, provisions in various articles would be seen to be inconsistent with provisions elsewhere in the text.

Would this matter? Probably not, if regulators decided to adopt a local approach to implementation, to reflect local sensibilities.  Surely, someone argued,  it is better to allow local regulators some latitude, rather than require them to follow the whims of politicians who don’t understand in detail what they are legislating about, and who will be leaving the European Parliament within months of their vote.
Another pointed out that we should not criticise the regulators. After all, they are only doing their job.  They don’t make the laws. The firepower really needs to be aimed at those who are politically accountable for taking the relevant decisions. Not those who are to be charged with implementing the decisions.

Let’s face it.  Confidence in European institutions is not at its highest, right now. All over Europe, citizens appear to be increasingly disenchanted about what is being offered to them from the centre. Accordingly, any new measures that might cause local citizens to query their necessity might only cause further disenchantment with the grand European project. That’s absolutely not what is needed when citizens are about to vote in European elections for candidates that might cement or sever links between nation states and the European Union.

Another surmised that, no, the Commission and the European Parliament will come up trumps. Under the guise of the Lithuanian Presidency during the second half of this year, and the Greek Presidency during the first half of 2014, heroic efforts will be made by the Council of Ministers and the College of Commissioners to keep data protection a priority. Other measures, such as the 70 items of legislation that are needed to implement the EU budget for the next seven years, as well as preparation for the Eastern Partnership summit, will wait their turn. Instead, European citizens will be delivered a package of fundamental human rights that will be so compelling that Commissioner Vivane Reding will instantly be proclaimed beatified.

I was desperate to hear more from this commentator, but just at that point they slipped from their chair to the floor.

Well, it was a late night.