No titillating titbits about the Regulation this time 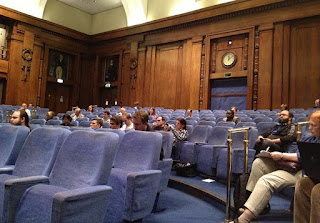 Despite the promise of a bit of nudity, the session on “Naked Citizens! The General Data Protection Regulation and why you should care about it” at yesterday’s Open Rights Group conference in Central London attracted a pretty small audience.

The day’s proceedings (in the lecture theatre at the Institute of Engineering and Technology, next door to the Savoy Hotel) started with promising numbers in the audience. Some 350 people were due to attend for all or part of the day. Well over 200 people attended the initial keynote speech, then half of them drifted away just before the commencement of the second session, on the “Snoopers Charter – What’s the situation now?” Unfortunately, the audience halved again as Anna Fielder from Privacy International, David Smith from the ICO and Kasey Chappelle from Vodafone took their places on the stage for a general reprise on what most privacy professionals already know.

And this was a pity, for what happened next was a vivid demonstration of what happens when a Panel Chairman is inadequately briefed about what the speakers are likely to say, and how long they are likely to speak for.

Anna and David kept their opening remarks short. Anna spoke for a few minutes on the main sticking points of the current negotiations on the Regulation. David spoke for a little longer, explaining that there was no absolute certainty that the measure would be agreed next year, as the European Parliamentary elections in 2014 require agreement by Spring 2014 if there is to be sufficient Parliamentary time for it to go through all the relevant stages. The ICO was in favour of the introduction of sensible regulation, not red tape, and was mindful that a balance had to be struck between privacy and other rights. Interesting. This is not language I’ve heard coming from the European Commission for some time. The Commission have spoken in terms of privacy as a fundamental right, but not one that necessarily needs to be balanced with other rights.  What else did he have to say? Well, David was marginally optimistic that agreement would be reached, and that there is more that is good than is bad with the current draft.

Then it was Kasey’s turn – and she went on for a significantly longer time than had been taken by the others. She was the only speaker to use Power Point slides, and I can only assume that the Chairman knew what she was likely to say, and how long it would take her to say it. We, in the audience, were not in on the secret. And from what I saw, at no stage did the Chairman try to interrupt her.

In her view (which I increasingly agree with), privacy is not seen as a differentiator but as a matter of legal compliance -  and an environment of more prescriptive rules will result in an environment increasingly dominated by lawyers. The trouble with lawyers is that they are often instructed to advise on explaining the minimum that needs to be done to ensure that the client stays out of trouble. Stuff the consumer experience, or a more holistic approach to privacy – what company directors are primarily concerned with is reducing their liabilities.

Notwithstanding this rather bleak premise, Kasey explained in some detail how Vodafone upheld its own privacy commitments (which create a culture of privacy across the company) with a Privacy Risk Management System (with standard global risk control commitments) and a Critical Privacy Risk Register (a formal management and global policy governance of the most critical risks facing the company and the communications industry). All good corporate stuff, but it wasn’t about the Regulation - and that was what I had come to hear about.

With almost ten minutes of the session left to run, Kasey wound up and I braced myself to see the naked citizens. Alas, none were to be found, and I was left with the sense of frustration that Anna and David must have felt, perhaps hoping for a longer debate on the actual Regulation itself. Had David known that he would devote some 5 hours travelling time for the privilege of addressing 100 people for just over 10 minutes, he might have decided to have offered the speaking slot to another oik at the ICO, so he could spend his Saturday mowing his lawn.

Note:
Other sessions were run concurrently, discussing a host of other hot topics, with many delegates keen to focus on issues that were on the front pages of many national newspapers yesterday. I won’t touch on those issues in this blog – other than to report that Tim Wu, a technology historian, began his keynote speech by announcing (in a rather hysterical manner, I thought) that, looking at the papers, we are in a state of absolute crisis, and it is therefore absolutely essential that a strong and effective digital rights movement continues to exist.

Image Note:
Do not be concerned. Conference delegates were advised that their images might captured if they sat in particular sections of the audience.