Mass surveillance: time for another speech 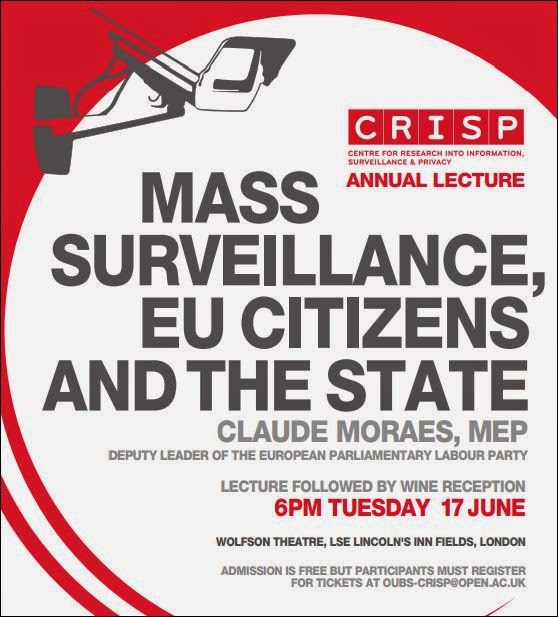 In the forthcoming hotly contested (yawn) elections for the European Parliament, London will be represented by 8 MEPs. In the last elections (2009), it returned three Conservative MEPs, two Labour, one Liberal Democrat, one UKIP and one Green.

Without offering any comments on my own political beliefs, I do think it inconceivable that London will not return at least one Labour MEP in 2014. Given that the Labour list is headed by Claude Moraes, who is currently a Labour MEP, it is as dead a cert as you can get that he will be, once more, selected by a grateful electorate and returned to continue to do whatever he does within the European Parliament.

One of the things he will continue to do is to comment on mass surveillance, EU citizens and the state. Indeed, the Centre for Research into Information Surveillance and Privacy (CRISP to its chums) has already invited Mr Morales to speak on that very subject at the London School of Economics next month. They know a dead cert when they see one, too. They didn’t even wait until he was re-elected before inviting him to speak.

So, expect a crop of the usual suspects at the Wolfson Lecture Theatre on 17th June. Admission is free, but you must register in advance. I’m not sure why. It’s probably got something to do with data protection. But there’s no fair processing notice readily available, so no-one knows what will happen to whatever particulars they choose to submit.  I do hope the irony of having to register in advance (without a fair processing notice) won’t be lost on the event organisers, especially since it is bound to attract people who aren’t keen on surveillance.  And since the speaker is an MEP who is so passionate about promoting really strict data protection standards.

Anyway, expect the usual stuff to be trotted out by the usual suspects. When will anyone change their tune? When will someone have anything new to say about the subject? When will some bright spark have an answer to the key question "what is less dreadful, but about as effective, as mass surveillance?"

If you want to hear people (possibly) drone on about drones, or whine until the wine is served, feel free to register to attend.


Yes, I expect I’ll be there. I don’t think I’m doing anything else that evening. I will be attending a really good seminar on privacy and data protection at one of the Oxford colleges sometime that week, but even so, there ought to be time to slip down to the LSE and witness yet another exchange of views on a subject that used to grip Guardian readers (among others).