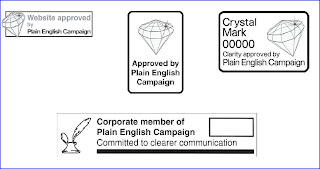 How much effort is really put into the drafting of EC laws? Why is so much of it so incomprehensible? If the Plain English Campaign can combat gobbledegook in the UK, why can’t an equivalent European body combat unintelligible Eurospeak?

If, like me, you have thought about these matters, and you’ve draped wet flannels over your head to keep your brain from overheating as you struggle to find the real meaning behind various EU Directives, fear not. Help is at hand. Well, it will be soon.

Because on 31st October, Elanor Sharpston QC, who is an Advocate General at the Court of Justice of the European Union, will be speaking on these matters at a free lecture in Central London. She’s calling her presentation: Drafting comprehensible legislation in a multi-lingual, multi-legal-system environment: some reflections on the EU drafting process and its consequences. I do hope that one of the things she will be doing, on behalf of the juro-linguistic translators is apologising for the stuff that the legislators pass as laws. I do hope that she will be explaining how much care and effort really is made to improve the draftsthat were originally presented by euro Parliamentarians, but we’ll see.

I am a supporter of the Plain English Campaign, and remember, some 20 years ago, visiting their Headquarters in a converted mill in High Peak, Derbyshire. Working away in the corner of the building was their founder, Chrissie Maher. Chrissie’s life story is an inspiration to us all. She largely missed out on formal education and could not read until she was in her mid teens. She was heavily involved in community work during the 1960s and founded Britain's first community newspaper, 'The Tuebrook Bugle'. In the 1970s she set up 'The Liverpool News', the country's first newspaper for semi-literate adults, and Impact Foundation, a community printshop. Chrissie was invited to be a councillor on the National Consumer Council when it was created in 1975. Around that time she started the Salford Form Market - a project to help people fill in forms - which led to the birth of Plain English Campaign.

I got to meet her when I was working with the Association of British Insurers, as the ABI was encouraging its members to change its practices in line with new rules that were introduced with the implementation of the Unfair Terms in Consumer Contracts Regulations in 1989. I remember working with insurers to develop clear ways to communicate with customers – an initative that was strongly encouraged by a senior Office of Fair Trading official, a certain Richard Thomas. Yes, that Richard Thomas!

Don’t let the venue of Elanor’s presentation put you off. The event has been organised by the Institute of Advanced Legal Studies of the University of London, but the presentation will take place, because of its significance, in Senate House, in Bloomsbury, Central London. You don’t have to be a student (or an academic) to attend. Just be someone who has a keen interest in the subject matter. And be prepared to have a drink afterwards with some familiar faces to discuss the points that she will have made. I might even buy a round myself.

It’s likely to be great fun. And very instructive. So, hopefully I'll see you there in good time for a 6pm prompt start. The chairman - The Hon Mr Justice Sales – is unlikely to look too kindly on the latecomers. Those who fancy registering should point their browser here: http://www.sas.ac.uk/events/view/9842