Whose personal data is it anyway? 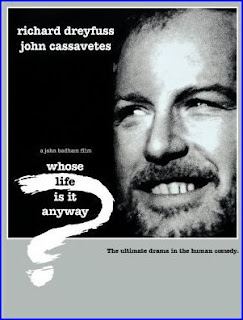 The current “debate” over the “right” to be forgotten reminds me of the plot of Whose Life is it Anyway?, a television play first transmitted in 1972. The play brilliantly raised issues that were so profound that the television version was turned into an award winning stage play starring Tom Conti in the West End in 1978, transferring to Broadway the following year. The film version, starring Richard Dreyfuss, was released in 1981.

What’s it about? Basically, the central figure is a profoundly handicapped sculptor. Left a quadriplegic after a car accident, he feels utterly useless, as both an artist and a human being. He doesn't want his family's love, or his doctor's care, or his nurse's ministrations. He simply wants to die-but this is impossible, given the legal state of things in the 1970s. It’s one of the few plays/films in which a person's right to self-destruction is regarded as a happy ending. Actually, it’s not as depressing as it sounds, and contains some wonderfully funny lines.

It’s reminded me (as if I ever needed reminding) that Human Rights Act legislation ended up conferring rights on bodies that aren’t even human. In a data protection context, data controllers have rights, too, and these need to be balanced against the rights of individuals.

I gather tempers got quite heated during a recent meeting of Data Protection Commissioners as they discussed such things. What may be nice to have in theory can be impossible in practice.

So my advice to those who wish to continue this argument is to agree that, rather than exchanging views in ever more strident tones, they order a copy of the Whose Life is it Anyway? DVD and appreciate that the problem wasn’t totally resolved when it was debated 40 years ago. The protagonists should not get too hot under the collar when it dawns on them that they can’t totally resolve it now – but they will have a really enjoyable 118 minutes.