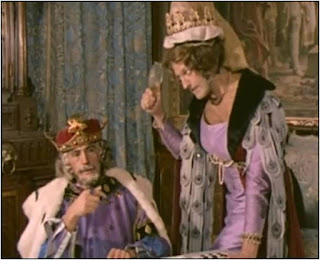 I’ve been preparing a presentation on cookies for a bunch of marketing professionals. I’m guessing that they will already be bored stiff of hearing about the legal minutiae, and will switch off almost as soon as I mention either of the dreaded phrases “European Commission” or “data protection”.

So, how should I craft something new that makes a few serious points, while at the same time keeping an audience like this engaged? I’ve formed a cunning plan. I’ve be wearing a pair of red specs and will use linguistic terms that these guys get. And when I’ve told them the tale of King Otto, I’ll explain the relevance it has to the development of cookie regulation over the past few years. Then, they might understand what I’m on about.

Some of the language used by those who told the original tale of King Otto is quite rude, so I’ll clean it up, but I will let them know where they can read the unexpurgated version. The original tale was narrated by John Cleese in a 1972 episode of the amazing Monty Python’s Fliegender Zirkus.

The tale is of a wise old king called Otto (pictured), who played strange songs on his Hammond Organ up in the beautiful castle where he lived with the gracious Queen Syllabub (also pictured), and their lovely daughter Mitzi Gaynor. One day, Mitzi suddenly fell in love with the most beautiful young man she had ever seen. Luckily he was a prince. So she looked him up in the Observer's Book of Princes, learned his name, and went and introduced the subject of marriage to her father.

King Otto, as was his want, before giving permission to marry, always set the same task to princes, which, if they succeed, proved them worthy of his daughter's hand. At nine o'clock the next morning, armed only with their sword, they had to go to the highest tower in the castle, and jump out of the window. Invariably, dressed in a beautiful white robe, and gripping their magic sword, they would plummet to a painful death.

One day, when Princess Mitzi was out hopefully kissing frogs, she spotted a flash of gold beneath a weeping willow tree, and there, sure enough, was a prince. His name was Walter. He was rather thin and spotty, with a long nose and bandy legs, and nasty unpolished plywood teeth, and bad breath, and a rare foot disease, 'But', thought Mitzi, 'a prince is a prince,' and she fell in love with him without another thought and rushed into his arms. And after a time, or a few times anyway, he too fell in love with her, and very soon they were on their way to ask King Otto's permission to wed.

This time, giving into pressure from Queen Syllabub, King Otto changed the task. Prince Walter was excused of jumping out of the tower, and instead the following exchange took place:

And what’s all this got to do with cookies?

Well, are all old enough to remember the dire warnings of an impending disaster as web masters protested that were to be required to ask internet users to “consent” to something that everyone believed would be far too hard to explain. And yet, what’s happened since the ICO’s recent compliance milestone passed? Have internet users miraculously become better educated? Or has someone changed the task?

All will be revealed should you amble along to my presentation during the Marketing Week Live exhibition at London’s Olympia later this month.