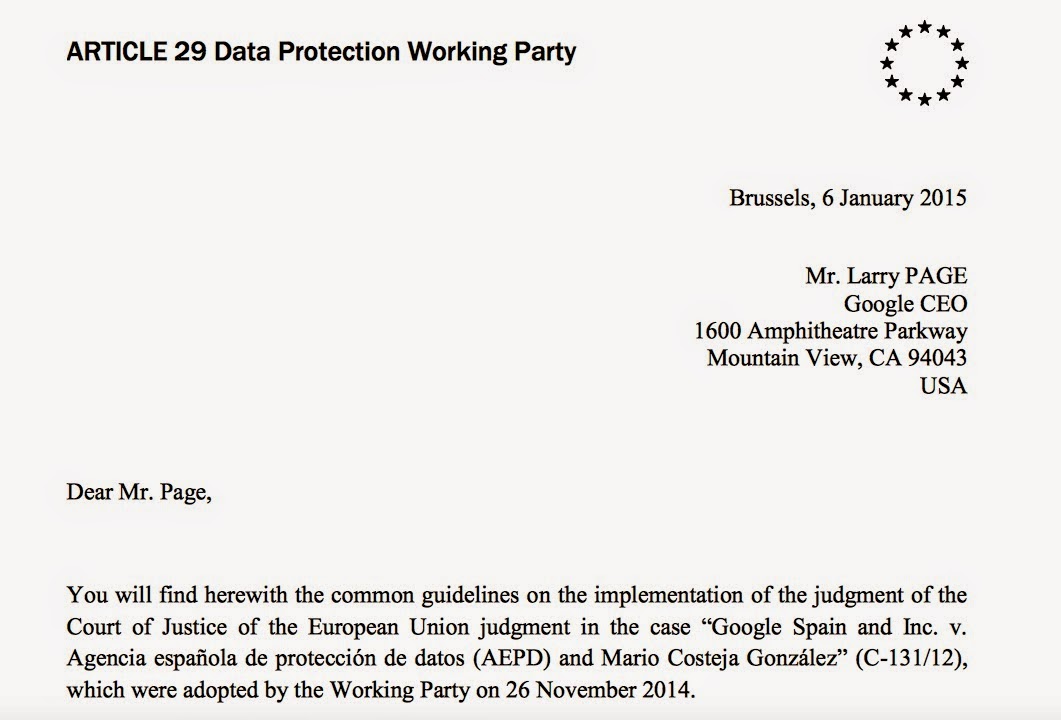 I’ve read the letter from the Article 29 Working Party to Google and to various Internet search engines in the light of the Google Spain decision. It concerns “The applicability of Directive 95/46/EC to a search engine insofar as the processing of personal data is carried out in the context of the activities of a subsidiary on the territory of a Member State, set up to promote and sell advertising space on its search engine in this Member State with the aim of making that service profitable.”


And I have some difficulties with the letter.

I should start by agreeing that there may be circumstances where offensive material must be de-listed by the search engines.

However, the letter’s key sections are:

“De-listing decisions must be implemented in such a way that they guarantee the effective and complete protection of data subjects’ rights and that EU law cannot be circumvented. In that sense, limiting de-listing to EU domains on the grounds that users tend to access search engines via their national domains cannot be considered a sufficient means to comply with the ruling. In practice, this means that in any case de-listing should also be effective on all relevant domains, including .com.

Moreover, search engines should not as a general practice inform the webmasters of the pages affected by removals of the fact that some web pages cannot be acceded from the search engine in response to a specific name-based query.”


Is this a problem?

It depends critically on what the material is and whether people have confidence in the panel that will ultimately decide what material is to be censored. I don’t think it should be up to the search engines to make the entire decision – even though, of course, its their commercial activities that led to a decision to list the relevant website in the first place.

Fortunately, there are some 40+ former senior privacy regulators that might be available (for a fee) to offer advice on an as-required basis.  Unshackled from their former roles, some may have more pragmatic minds that I was once led to believe.  So, perhaps we need a “Star Chamber” of former national regulators who can preside over the harder cases.

I do have a difficulty in accepting that decisions, even if made by the “Star Chamber”, should have an effect on individuals that search outside the EU.  If, for example, I was the Minister of Information in some backward state I might well be determined to control the flow of information within my own State, and might well be embarrassed if certain information were to be disseminated outside it. But I might be rightly condemned in some quarters for trying to censor information that others had a legitimate right to know.

I also have difficulty in accepting the view that webmasters should not be told of their sites that had been de-listed. Are we to allow secret courts within the EU being able to dispense “justice” in ways that can’t be challenged? I do hope not.

But I suppose the Article 29 Working Party has to be seen to be doing something.

If nothing else, it's encouraging a debate on the salient issues.

Whether it's views are taken on board by the global Internet search engines is another matter entirely.