In praise of ... the Investigatory Powers Act 2016 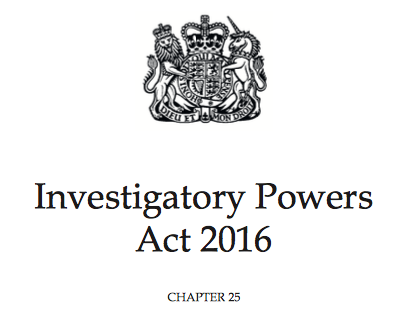 A number of commentators will assume that, should the UK not receive an adequacy assessment by the European Commission with regard to its data protection standards, a key reason will be the impact of the UK’s Investigatory Powers Act (IPA) which prescribes how UK public authorities obtain personal data for national security and law enforcement purposes.

I see the IPA as an outstanding example that Governments of all countries should adopt to ensure that public authorities act transparently and put effective mechanisms in place to ensure that human rights are appropriately respected.

To recap, in 2016 the IPA brought together all the existing covert and overt statutory powers that were then available to enable the UK’s intelligence agencies, police and other investigatory authorities obtain intelligence and communications data. This included introducing new safeguards in the approval of the use of investigatory powers use and created a single independent Investigatory Powers Commissioner responsible for oversight.

In 2019 the Investigatory Powers Commissioner established the Office for Communications Data Authorisation. This body is responsible for safeguarding an individual’s right to privacy under the Human Rights Act 1998. It makes independent decisions on whether to grant or refuse communications data requests, ensuring that all requests are lawful, necessary and proportionate.

In terms of transparency, a great deal of information about how the IPA has worked in practice is available from the annual reports that have been published by the Investigatory Powers Commissioner. The first annual report, published in January 2019, was organised into chapters which reflected each of the powers the Commissioner oversaw and (its 129 pages) contained a significant level of detail as to how each of these powers were used.

The second annual report, published in March 2020, has a different structure, with chapters on each of the types of organisations that are inspected and (its 138 pages) focused on the key findings from the inspections. This gives a clear sense of the range of issues that impact the different bodies.

Many people will never be satisfied with the way the UK’s intelligence and investigative communities operate. But they should be reassured to some extent by appreciating the great care that is taken by the Commissioner and his staff, including the Judicial Commissioners, to authorise warrants using the ‘double-lock’ method (so decisions made initially by politicians and senior public officials must also be authorised by a judge before the warrant is effected); to conduct regular inspections of the agencies that have been authorised to use investigatory powers; and, when errors are reported, to carry out ad-hoc investigations into to determine the root causes.

Additionally, some people may also be reassured through the work that is carried out by the Commissioner’s communications and policy staff, who engage with a wide range of opinion formers to enhance public confidence in the use of investigatory powers and improve understanding of the Commissioner’s independent oversight.

Before the coming into force of the IPA, the Home Office and the UK's intelligence agencies spent much less time engaging with representatives of civil society and other opinion formers. Important lessons were learnt following the failure of the IPA’s predecessor, the Communications Data Bill, to reach the Statute Book and replace the Regulation of Investigatory Powers Act 2000. It was realised that, actually, the Government had a good story to tell about the care it took to respect human rights in the context of exercising powers to obtain communications data. Engagement with stakeholders outside the closed investigative world was something that should not be feared but embraced. Where opinion formers had concerns, these issues should be addressed. With more transparency, and more resources devoted to explaining how transparent the new processes were, the Government would have an even greater story to tell.

In my experience, no UK intelligence, police or investigations officer has ever wanted to have had their reputations traduced by being unfairly accused of trampling over human rights. The Investigatory Powers Act has set out what behaviours are acceptable, and the Commissioner’s annual reports have evidenced compliance with these behaviours.

As a specialist advisor to the Joint Parliamentary Committees that reviewed both the ill-fated Communications Data Bill in 2012, and the Investigatory Powers Bill in 2016, I’m honoured to have played a small part developing legislation and promoting investigative practices that ought to be the envy of the world.