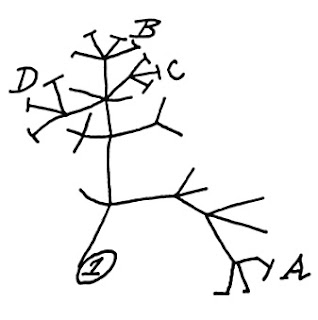 Charles Darwin did it with a sketch. And Michael Birnhack did it last night with a public lecture at the Institute of Advanced Legal Studies. What did they both do? They tried to explain what they meant to an audience of people who were (with a few notable exceptions) not as bright as them.

Charles Darwin’s famous Tree of Life sketch, jotted down in 1837-8 shows his insight of how a genus of related species might originate by divergence from a starting point.

Michael Birnhack’s presentation, delivered to some 40 students, scholars and academics, was based on the premise that something is going on in the privacy realm that bothers us. Something may be going wrong – so something must be done. But what?

The emergence of recent technologies suggested that there was a greater need to forecast the implications of future technologies that will impact on privacy – both for the good and for the bad. Advances in computing suggests that the privacy focus in future may be more on reacting immediately to events that are currently happening, rather than relying on huge databases of stored information to help predict the shape of new events.

Yes, privacy is a vague, elusive and contingent concept, and it remains a fundamental human right. But just what is it that comprises this human right? Is it just privacy as control? Or is it something else?

As Michael quickly took us through the usual legal concepts of privacy, the brilliance of the earliest work shone through – the concept of the right to be let alone, developed by Warren and Brandeis over 120 years ago, still remains pretty valid. But, increasingly, in the modern world, the rights of groups of people trump the rights of individuals who want to be let alone.

So where are we now? Is it just about control?

The tectonic plates are turning against Westin’s contention (1967) that it’s about the claims of individuals, groups, or institutions to determine for themselves when, how and to what extent information about them is communicated to others. Privacy is not the same as a property right. Information control, in the privacy concept, should not just be about a right for an individual to withhold information. The real challenge lies in transparency, since it’s so hard to for an individual to control their personal information which is no longer held by them. The EU's proposed new concept of a right to be forgotten is about as dead as the dodo - which was the point I made in yesterday’s blog about my night with the Sex Pistols.

As Michael suggested, privacy is not only a legal right, but it’s also a social norm. Privacy is technology-dependent, and technology both affects us and also changes our perceptions. Richard Thomas famously said in 2004 that “we are sleepwalking into a surveillance society”.

"But", Michael concluded last night, “theory can wake us up”.