Was it easier when DPA miscreants faced the Chester Hangman? 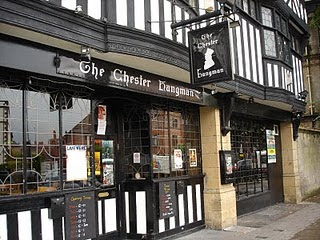 I was spending a couple of days around the old Roman city of Chester towards the end of last week (don’t ask why) when I overheard a group of what I took to be journalists talking about fines and confiscation orders for Data Protection Act offences. Ah, I thought to myself, here’s some useful research material here for my blog. But they seemed a bit confused as to what the process and the rules were, so I thought that I should do a little digging myself so that I can advise a potential DPA criminal about the downside of getting caught.

I hope the following points make sense to any would-be miscreant:

1) Don’t even think of stealing personal information and selling it to someone else.

3) Keep all your receipts – as it saves so much time in the end. It also helps you work out how much, in financial terms, you have benefited from the criminal activity.

4) Find a way of declaring this income to the tax authorities – as its also going to save so much hassle in the end.

5) When you are caught, which you will be, make a full confession at the earliest opportunity. This gets you the greatest discount on your sentence. Express remorse and act ever so humble.

6) Try to get yourself legally aided, as these solicitors can eat up lots of court time – and if you change your legal representatives during the case, you can drag out the proceedings even longer.

7) Expect your case to start at a magistrate’s court, but then to be transferred to the Crown Court – as Section 55 DPA offences really are quite serious offences, these days. The prosecutor will probably be the Information Commissioner, rather than the Crown Prosecution Service. But unlike some CPS lawyers, the ICO retains a team of brilliant barristers. So, be warned. You're in for a rigorous ride.

8) See what your legal representatives can do by negotiating away at the offences you could be charged with. But steer clear of pleading “not guilty” – because then it’s going to mean a jury trial, and all hope of a reduced sentence flies out of the window. It’s a lot more time, effort and expense for everyone – and in the end we all know you’ve been a naughty boy.

9) Don’t expect to be working during the period of the commencement of court proceedings and the outcome of the case (and probably for a long time after that, too). You’ll spend the time being bored, depressed and increasingly worried about what's going to happen next. You might expect your marriage to fall apart, too.

10) Make sure your legal representatives spend as much of the legal aid budget as they can get away with, querying every last detail of the prosecution case. Remember, it’s a war of attrition and legal process, not a war of right and wrong. The longer it drags on, the more disinterested people may get. Conversely, the more they may stick their heels in.

11) Try getting the case moved around different courts at different stages of the legal process - it’s always nice to visit new towns, and most “Premier Inns” charge the same room rate, wherever you go.

12) Don’t appear too cocky, as this can really rile the prosecution team, and they might retaliate by working even harder to make sure they unearth all the available evidence. And if they’re really good, they may even unearth evidence about other misdeeds that you thought you had hidden away for good.

13) Don’t think that pleading guilty is the end of the process. It’s not. There could be another year to go before it’s all over.

14) Once you have pleaded guilty, expect a nasty surprise. You’re not going to face a custodial sentence for a Data Protection Act – yet – but your pockets could be about to be ripped open. The Assets Recovery Agency may come after you, to recover all the money you have benefited from (see point 3). The ICO likes this approach as they get to keep 18% of the money you hand over to the Agency. But beware, oh so very aware of the fact that if you're found guilty of a Computer Misuse Act offence, you had better take your toothbrush - you can get locked up for those.

15) Fill in lots of forms and explain, in considerable detail to the Assets Recovery Officer, just what funds you have at your disposal, and how much you are worth.

16) Don’t even think about lying to the Assets Recovery Officer. He’s got powerful friends (see point 25) and it can take a very long time to check that you’re not lying about your true wealth.

17) If you’ve actually got fewer assets than the amount you have benefited from crime, think very carefully about what to do next. Consider making an offer to the prosecution – hoping that they will accept a lower amount that the amount you have benefited from. But, remember, they’ll probably only accept an offer if they’re sure that you’ll have little more than your bus fare home once the Court has dealt with you.

18) It’s acceptable to look a bit poor and downtrodden come the final sentencing hearing, when you’re told what’s really going to happen to you. But keep plenty of eye contact with the judge and, again, act ever so humble and contrite. This is not the time for playing the big man.

19) Don’t worry about prosecution costs if you do have to make an offer to the Assets Recovery Agency which reduces you to penury. The Agency has first dibbs on your money. But, if there’s no money left over, then you can’t be made to contribute towards the (probably quite considerable) costs which the ICO, as a prosecution agency, will have to meet. However, as the ICO will get 18% of the money you hand over to the Assets Recovery Agency, they probably won’t mind that much. Remember, you're not usually told to pay prosecution costs in Crown courts, anyway. That’s more likely a matter that will only trip you up if your case remains confined to the magistrate’s court.

20) Don’t worry about any fines if you do have to make an offer which reduces you to penury. Again, once the Assets Recovery Agency has taken all your money, that’s your lot. So the court can't require you to pay any. (Especially if you have no prospect of work for the foreseeable future.)

21) Expect to go to prison of you can’t pay the money you’ve previously offered or agreed to pay the Assets Recovery Agency. You’ll probably get 6 months to pay the Agency, and if you don’t pay within the agreed time, you could face an automatic prison sentence of up to 18 months.

22) Expect to get a conditional discharge at the end of the proceedings. This means that, if you misbehave in the next few years, that court will take into account the gravity of the offence you are currently being sentenced with – and life will get much, much tougher. But, if the papers have recently covered security breach-type stories, your Computer Misuse Act offences might well get you locked up, so that the bench can set an example to the rest of us.

23) Expect to get a reasonable amount of press coverage. The Information Commissioner’s Office likes to make examples of criminals – even if it’s just to throw some fresh meat to the “custodial sentence” brigade. The less people are fined, the greater is the clamour for custodial penalties. Or perhaps community sentences. You could end up clearing litter from the ICO’s car park for 250 hours, something like that.

24) Remember to smile each time you enter a court building – the press photographers love to get decent snaps of the criminal fraternity – and you just never know which court you’re going to be photographed in. But you are going to get photographed.

25) Try to change your name after the case has closed – as the internet has a long memory, and full details of just what you’ve been up to are going to be plastered all over it. If you do change your name, make sure you don’t publish any more self pics on Facebook – as your old and new pictures will be tagged and everyone will know what an oik you’ve really been.

26) Don’t think it’s all over yet. Remember, that man you upset at the Assets Recovery Agency? Well, he’s got some friends who work for the Inland Revenue, so you might encounter an early wake-up call from the tax inspectors some time soon. And their powers of civil recovery are far more draconian than those of the Assets Recovery Office. They won’t just be looking for any DPA-type misdemeanours. Oh no, they’re going to go through your previous life with a very fine toothcomb.

27) Remember point 1 - don’t even think of stealing personal information and selling it to someone else.

At least, when the Chester Hangman did his stuff, it was all over in a few minutes. These days, the authorities could have you dangling about for years.


Disclaimer
These conjectures are entirely imaginary and bear no direct resemblance to any recent incidents which may I may have encountered in my professional work. Any would-be miscreant would be well advised to seek their own advice about the consequences of their actions, and they should not rely on anything that has been posted in this article. It could be all lies and totally incorrect.