Data Protection – as an opera? 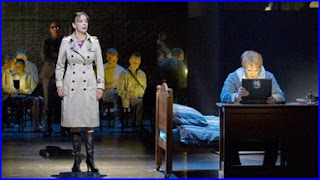 If you are quick, and can get to London Coliseum in the next few days, you are going to be lucky enough to witness a data protection treat. This is Two Boys, Nico Muhly’s first opera, jointly commissioned by the English National Opera and the Metropolitan Opera in New York. It’s not for the faint hearted – it cries out for a different audience, one which is familiar with the shadowy world of internet chatrooms and the psychosexual crimes committed under the various identities assumed there. It’s an opera which has as its theme on the nature of identity, and the power of the internet – so as far as I am concerned, it’s an opera about data protection. If you want to know more about social networks, get over to the ENO.

I won’t give anything away, other than to remind the more astute members of the audience that there exists a spooky similarity between the plot and events which took place in 2003 northern England. And the only other thing I’ll say is that it really brings to life one of the points made by during the ICO’s anonymity seminar on 30th March (see my earlier blog). At that event, Barry Ryan, of the Market Research Association, spoke about the power of verbal ticks to give away one’s identity. Perhaps Nico Multy was in the audience.

Of course, many plays have also had mistaken identity as their theme – but I’m not too sure how many have been able to incorporate the internet as well. Last night I was at the Hampstead Theatre to see the Propeller Company’s brilliant production of The Comedy of Errors. This must surely be one of the earliest British plays with mistaken identity as its central theme. It’s an all male Shakespearean company, incorporating an amazing South-American style band, which even accompanies you to the bar during the interval. Bawdy, hilarious, stunningly theatrical, and wonderful modern touches made everyone but the most dyed-in-the-wool traditionalist roar with laughter. Probably better than the original 1594 production. Catch both shows if you can.

You see, data protection can be fun - and cultural - and it’s high time that we commemorated these aspects too, as well as its darker sides.