Is this the speech that Commissioner Reding will deliver on 25 January? 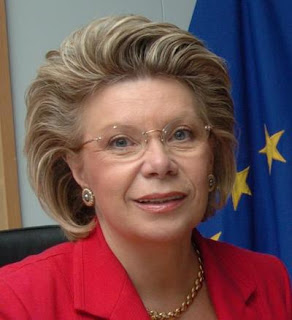 Before I depart for the World Economic Forum at Davos in Switzerland, where I plan to spend the rest of the week conferring with world leaders and others who are at least as important as me, I have decided to announce that you will have to wait a little longer for the Commission to publish its proposals to revise the current data protection directive.

Yes, I know that you were all expecting something substantive by Data Protection Day. So was I, to be frank with you. After all, who would have thought that so many people might want to get so upset with the proposals that my officials had so carefully worked on for so many months. I think that’s rude. You lot should have been grateful for what you were going to be given.

Now, the cat’s really out of the bag. It’s not just about defending the basic human rights of individuals any more. Even data controllers think they’ve got rights these days, and they’ve been working frantically behind the scenes to ensure that whatever does emerge from the Commission recognises those rights to a far greater extent than I thought they deserved.

So, I have failed. I had hoped to have presented you with a package that was so tilted to the rights of the individual that there would have been riots in the streets when citizens became aware that companies, institutions and public authorities wanted to dilute them.

I am sorry. My officials will now continue their hard work to ensure that the rights of individuals are at least balanced against the legitimate interests of businesses and public authorities.

I really don’t know how long this additional period of internal consultation will last. After all, my officials are busy people, and there are other things on their plate, some of which are much more important than changes to the data protection regime.

I am pleased to announce today that I am hoping that the draft legislative proposal will be published in mid-March. But you know me. I am an eternal optimist. I always look on the bright side of life, and I always live in hope that we can resolve our differences by a series of amicable and constructive discussions.

Will the world come to an end if the proposal is not published in mid-March? No.

Are data controllers capable of applying the current rules in a flexible manner, ignoring the bits that are hopelessly out of date? Yes.

Will I be bothered if I have to announce in mid March that the review will take even longer before it can be shared more widely? Not really.

The current review will take as long as it takes. So please wait, with patience, good humour and a sense of compassion for those who are straining every sinew to knock heads together and to make some sense of this shambles.

I won’t be taking any questions today.


Sources:
If I were asked to draft a speech for Commissioner Reding, scheduled for delivery on 25th January, this is what I would submit.