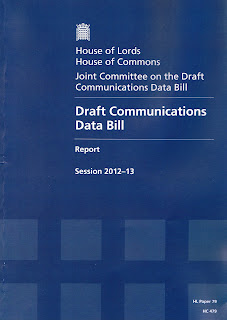 I remember, several years ago, raising an obscure issue about the Regulation of Investigatory Powers Act with an official from the Home Office. My contention was that the section of RIPA did not make much sense, and appeared to lead to a perverse outcome.  “But it’s the will of Parliament”, replied that official. And that was that, as far as he was concerned. No further explanation or justification was necessary.

Well, that Home Office official is still in his post, and I have been privileged to advise the Joint Committee on the draft Communications Data Bill on the proposed amendments to RIPA.  So, I’ve been trying hard to ensure that parliamentarians will be much more aware of the implications of these proposals than they were when RIPA was first considered in the late 1990s.  This time, I expect that parliamentarians will find a way of expressing much more of their will, rather than delegating so many of the important details to the Government of the day.

As yesterday’s report says, it provides the opportunity for politicians: “from all sides of both Houses to come together and scrutinise the principle and the detail of potentially sensitive draft legislation. It gives an opportunity to build both Member expertise and political consensus. It allows interested parties from outside Parliament to engage with Parliament’s scrutiny process and to help inform Members on the consequences of implementing the proposals. It gives Government the chance to hear the preliminary views of Parliament at a stage when policy can still be amended before the introduction of a Bill proper.”

This scrutiny has taken the form, over the course of the summer and the autumn, of the Committee holding 20 meetings, hearing from 54 witnesses, carefully reading material submitted by some 200 individuals and organisations, and noting the contents of some 19,000 emails sent by people in response to prompting from 38 Degrees and the Open Rights Group.

Committee members also visited the Met Police and EE, the company which owns and operates both the T-Mobile and Orange brands, to see for themselves the procedure by which the authorities request communications data from Communication Service Providers, and how they respond to these requests.

A great deal of thought has gone into devising a constructive way forward.

I don’t think that there are many people who truly want to live in a society where law enforcement officials are not given the tools that really are necessary to enable them to do their job effectively.  But these tools, particularly as they apply to the use of communications data, must be used properly, and officials must be held accountable for their actions. The evidence given to the Committee certainly indicated that more should be done to demonstrate how robust the current system is. Detective Superintendent Allan Lyon from Greater Manchester Police said: “I think the inspection process, which is independent and separate from the police, may be an opportunity to develop some sort of public communication programme that can reassure the public that GMP treats this particular sensitive tactic with the utmost respect and we deal with it in a very lawful and transparent way”.

Sir Peter Fahy, Chief Constable of GMP, agreed: “I think it is frustrating that the public and some of the commentators do not seem to understand. I regard it very, very seriously, because this is an important capability. If there is any concern whatsoever from the public that we are using this inappropriately, that would be a huge damage to policing and a huge damage to victims of crime.”

So, where do we go from here?

Well, the report sets out, in a series of recommendations, a constructive way forward. If the Home Secretary were to ask her officials, or her Special Adviser: “What have I got to do to get some data communications legislation through?” then the answer is pretty clear.

What I think is also just as clear is the reply to the question: “Can I get data communications  legislation through both Houses of Parliament if I ignore any of these recommendations?”

Well, take a look at the experience of just some of the Committee members. A former Permanent Secretary of the Home Office and Secretary of the Cabinet. A former Minister of State at the Home Office and Chief Whip. Other politicians who were responsible for ensuring that RIPA obtained Royal Assent back in 2000. A former Assistant Director of the Department of Trade and Industry and Governor of the BBC. An eminent QC, specialising in Human Rights cases. A member of the Advisory Council of the Open Rights Group. I don’t need to go on. I’ve made my point.

As every member of the Committee has agreed with every element of the report, it will be interesting to see how the parliamentary arithmetic stacks up in both Houses of Parliament should the Home Secretary disagree with the approach that has been set out.

But I’m confident that this won’t happen. After having spent yesterday discussing the report’s recommendations with a wide range of key players, I’m convinced that everyone is determined to work together to ensure that an updated law is fit for purpose, necessary and reasonable.

This is a debate that I will continue to follow with great interest. And, I must assure you, we could be swiftly moving to a situation in which there is violent agreement on most of the key issues between all relevant stakeholders.

In my next blog, I’ll be reviewing some of the report’s recommendations that have not been covered by the media.