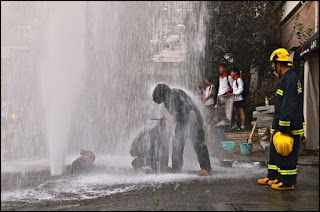 Privacy officers face another year of being deluged with literally hundreds of opportunities to attend data protection awareness sessions to ensure that everyone understands what the rules are, and how these can best be implemented.
They can expect a tsunami of events related to the recent reactions to the latest proposals that have been published to change the current Data Protection Directive. The latest reactions, either from European Parliamentarians, national Governments, or from the usual suspects, will spew out into cyberspace like water from a fire hydrant.
If you can’t cope with all the invites, don’t worry. Join the club.
Last February, I started to note privacy events that might be of interest to (the average) British privacy officer.  By the end of the year, my list had grown to some 140 events. On any given Tuesday, Wednesday or Thursday, somewhere near London a privacy event was taking place. Earlier in my career, when working for a Congressman on Capitol Hill in Washington DC, I would hardly ever need to eat at home, such was the abundance of canapés at the political events I attended every evening. Well, those gluttonous days are back again. Thanks to the most gracious generosity of so many legal firms, holding seminars and workshops for those who know how to get an invite, my home cooking days are long gone.
I expect to see lots of friends towards the end of the month, when the conference circus briefly moves to Brussels. Three whole days of earnest debate. Detailed philosophical speeches on the meaning and the future of privacy – before most people return to work with a bump and remember how hard it currently is to actually get even the basics right.
All this utopian academic speculation really is wonderful, but it is worlds away from life as I live it, which involves inspiring real people to realise that it’s in their own interests to effect minor behavioural changes to make things more transparent.
I do feel slightly sorry, though, for those who are constantly on the conference circuit. They appear to glide from one venue to the next, woven into a bubble with their contemporaries, with their feet mostly just above the ground, rather than on it. Pontificating on grand principles and statements are fine, but what works in theory has to work in practice. If it doesn’t work in practice, it’s worthless.
After that, the next global bash will be Data Protection Day (also known as Groundhog Day”) on 28 January, where privacy professionals from all over the world will gather in their local groups to celebrate the wonderful careers that can be carved out in this field. Sometimes, it appears that cities just don’t have venues that are large enough to hold all the privacy professionals that want to attend. In Washington DC, for example, two IAPP parties will be held to commemorate Data Protection Day. No, the venues aren’t miles apart from each other, either. Privacy folk can either choose the Asia Nine Bar at 915 E Street, or they can go to Penn Social, situated on the next block at 801 E Street.
In case party goers get confused as to which venue to attend, a special instruction announces that the Penn Social event: “is for Young Professionals in the Washington, DC, area.”
How about that! So when will we all next get invited to a presentation on “Privacy and Ageism?”
Joking apart, I would like to attend an event on privacy and ageism. There is a generational divide in attitudes to privacy, and I would like to hope that any new privacy rules focus on the needs of emerging generations. Not just the concerns of the generation representing the crusties who are currently at the pinnacle of their own regulatory careers.