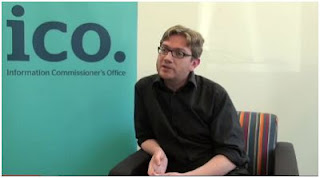 Yes, that man in black, he who tried so hard to make sense of the cumbersome cookie rules that appeared to arrive out of absolutely nowhere from the European Parliament a few years ago, has announced his imminent departure from Wilmslow.

Hurrah. After 10 years at the ICO, Dave Evans is moving on, to become Swiss Re's Data Protection Officer.

In an email to his chums on what he terms "the fabulously (and ironically) indiscreet data protection grapevine," Dave remarks that: "What I will miss most about my current role - apart from my ICO colleagues and the daily opportunity to laugh at Wilmslow's more comically extravagant retail outlets of course - is the variety of people I meet when doing the "liaison" part of my job."

Well, let me reassure him. Even though he won't be able to laugh so frequently at Wilmslow's more extravagant retail outlets, at least he'll get a salary that means he'll be able to afford much more of the stuff they sell. And, while Dave might not quite get the opportunity to remain in touch with the huge range of campaigners, geeks and nerds who live off (and frequently take issue with) every ICO utterance, he will find that there is a wide network of data protection professionals in and around the City of London that readily welcomes former ICO staffers.

Dave will soon be joining that close knit group of people who have served their time at Wilmslow and are now trying to make of it all in the City. Indeed, he may well find himself occasionally sharing the same lift with another former ICO staffer, Richard Thomas, as the Gherkin hosts the offices of Hunton & Williams as well as Swiss Re.

Perhaps, as the forthcoming ICO budget cuts start to bite, and the steady trickle of ICO leavers turns into a stream, it won't be long before the ICO finds that it has to issue its own Code of Behaviour for former ICO employees, to ensure that Wilmslow's greatest secrets remain "up-north". Or, will we soon be reading outrageous tales from some Wilmslow whistleblower about past goings-on that will shake the very foundations of the institution we so admire?

But, as Dave so rightly points out, the UK does enjoy a fabulously (and ironically) indiscreet data protetion grapevine!