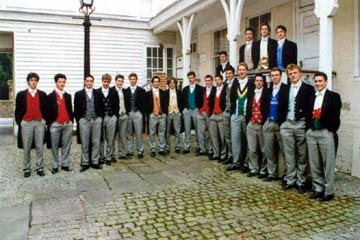 Not a phrase that will be common to many people, but I understand that it’s catching on among the boys at Eton College.

Now for the background – earlier this week I attended a very interesting meeting of the the Real Time Club which, founded in 1967, is believed to be the world's oldest IT dining Club. This meeting was quite special, as everyone gathered at their usual venue - the National Liberal Club – to consider how young people, "yoof", actually use technology. It was explained to us that young people relate to technology in different ways than their elders, more messaging via social networks than email, new values on privacy, more awareness of media and cost.

No evening like this would work without the personal testimonies of some of these “yoofs” – and the Real Time Club really did its members proud. No, it didn’t ask anyone from the local secondary schools in Westminster. We didn’t get the opportunity to hear from the "yoofs" attending the local Westminster City School, nor the "yoofs" from the equally historic Grey Coat Hospital, founded in 1666, after the Great Fire of London, when many inhabitants of the Old City of London moved to the medieval town of Westminster.

Instead, we got Liam Maxwell, Head of Computing at Eton College, (founded in 1440 by King Henry VI), who spoke about identity and young people's interactions with the internet and society. And to demonstrate the generational gap that spans more than just techniques and privacy practices, he brought along a selection of Eton's finest to explain what it actually meant to them in their own daily lives. The students at Eton College are generally known as Oppidans, if someone is paying their full college fees; or scholars, if their education is being subsidised to any significant extent. They had a profoundly different approach to privacy and one which older adults may not, and perhaps should not, be able to fully comprehend.

Just how media literate are they? Impressively so, actually. They are not as wrapped up in cotton wool as one might imagine. I should explain that, according to its website, Eton College, with a compliment of some 1300 boys, "is a full boarding school with no day or weekly students. Typically there are about 50 boys in a boarding house, ten in each year group. This offers a distinctive balance between small houses, which give a strong pastoral base, within a large, varied and challenging school. A new boy to the school will come to know the people in his house community very well indeed – especially his house master who is principally responsible for him, and his dame, who looks after his domestic well-being. They offer support and encouragement in every aspect of a boy’s life but without unnecessary intrusion. It is a delicate and important balance: boys are encouraged to share problems with those that can help but are steered towards mature resolution of them through their own thought and effort. From the very beginning, each boy has his own study-bedroom, there are no shared rooms. Boys thus have their own private space and are required to organise themselves and to develop self-discipline in meeting tasks and deadlines.”

The younger Oppidans are not (officially) allowed to access websites such as Facebook. And the older Oppidans, whom Liam Maxwell had brought along, explained that their own "Facebook" profiles showed off their better sides, rather than their complete personas. No-one wanted everything, “warts and all”, to be on public display. A "Facebook" profile portrayed an image of someone one wanted to be, rather than perhaps the totality of what one actually was. They were all well aware of the foolishness of placing material on-line that might later come back to haunt them. They were concerned at the implications of photos of them in high spirits, but were assured by their “beaks” (their Eton schoolmasters) that there would be no long term adverse implications, unless of course the images were of activities that were unlawful. (Perhaps, I thought to myself, it was acceptable for Oppidans to publish images of themselves spraying coke over each other, but certainly not snorting it.)

Well, we were all assured then.

And were there ever any suggestions that the "Pops" (the school prefects, see the accompanying picture which has been lovingly borrowed from the official Eton College website) might consider allowing any of the younger boys to use their identity for the purpose circumventing Eton’s age controls on the internet? "You mean so that the younger boys could also maintain their own facebook pages? Surely not!" the Oppidans replied, blushing and grinning from ear to ear...

So, if, despite their very best endeavours, Eton College can’t totally control a young person’s access to the internet, then what hope has a modern day parent, who lets their child surf the web from the privacy of their own bedroom, rather than from the living room where they may be more readily supervised?

As the evening drew to a close, one extremely distinguished Real Time Club member rose to his feet to fondly reminisce about his schooldays at Eton, just after the Second World War. Back then, according to Wikipedia, junior boys had to act as fags, or servants, to older boys. Their duties included cleaning, cooking, and running errands. A Library member was entitled to yell at any time and without notice "Boy, Up!" or "Boy, Queue!", and all first-year boys had to come running. The last boy to arrive was given the task. These practices, known as fagging, were phased out of most houses in the 1970s and completely abolished in the 1980s, although apparently first-year boys are still given some tasks by the Captains of House and Games. Anyway, the extremely distinguished member explained that the fagging system was most useful as it got the younger boys to quickly familiarise themselves with many of the older boys.

“Oh, but sir, we use emails for all that these days!” trilled an Oppidan.
Posted by Data Protector at 04:49