What will BigBrotherWatch be watching out for next? 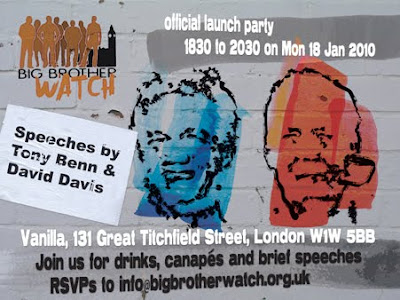 Earlier this week I was invited to the launch of a new pressure group run by Alex Deane, a campaigner with a mission. And he’s got influential friends too – the launch was attended by Mark Littlewood (Instiute of Economic Affairs), Shane Frith (Progressive Vision), Philip Booth (No2ID), Simon Richards (Freedom Association), Eamonn Butler (Adam Smith Institute), Jill Kirby (Centre for Policy Studies), Simon Clark (Taking Liberties Blog) various bods from the Taxpayer's Alliance - and many more. I spent a good 15 minutes chatting to someone who had worked in President Nixon’s administration, back in the 1970s. So you get the idea of the sort of crowd that Alex had attracted.

The opening speeches were pretty interesting, as we all got our first glimpse of what it was that the pressure group was trying to address. Tory MP David Davies (a latter day “Norman Tebbit “ of the Tory Party) introduced a fellow blast from the (recent) past, former Cabinet Minister Tony Benn. Just what do these prominent politicians have in common, occupying very different positions on the political spectrum? Well, the right and the left have met to agree on a common concern about freedom and abuse, and most particularly the extent to which a person’s civil liberties are capable of being abused by the misuse of the information which is compiled by a database state.

To get us all in the right mood, Tony Benn recalled: "I was on my way in my car to the House of Commons recently and, just outside, I was stopped on the street by a young policewoman, so I pulled over as she asked me too."

"She said that I was approaching a building of great sensitivity, and she was sure that I would understand why she was stopping me under the Prevention of Terrorism Act."

"That’s the first proper use of it I’ve heard of!" David Davis retorted.

Tony Benn was quite persuasive as he presented his own personal example of the speed with which technologies were being developed. His basic point was that we can’t control the speed of technological developments, but more importantly it was incredibly hard to prevent the misuse of such developments.

As I reflected on this later, there could have been no possibilities of terrorist outrages similar to the (2004) Madrid railway bombings when Tony's great grandfather was born; no remote detonations of bombs by telephone when his father was born; no 9/11 style atrocities when his mother was born; no live (1989) images of the brave students in Tiananman Square when he was born; and no need for an Internet Watch Foundation when his children were born. New technologies need new types of protective measures.

But, back to the point, the really big issue is about what “else” the state does with the powers (and the information) it has acquired. Civil liberties are very important because of the way these powers (and this information) can be misused. Tony Benn didn’t mind if his medical symptoms were on a hospital database, so that the doctors could look after him properly when he was ill, but he was not in favour of the establishment of databases for the control of people. He looks forward to the day when no one thinks it’s necessary to keep all our details on a database and watch everything we do. But I suspect we may have a long wait before that day eventually arrives.

And his thoughts gave me a lot to chew on as I attended (yet) another meeting of the “former” Interception Modernisation Programme a few days later. So you thought the IMP was dead? Well, Home Secretary should think very carefully before repeating some of those immortal lines of Monty Python star John Cleese, in the sketch where Mr Praline returned to the shop with his dead parrot:

“'E's not pinin'! 'E's passed on! This parrot is no more! He has ceased to be! 'E's expired and gone to meet 'is maker! 'E's a stiff! Bereft of life, 'e rests in peace! If you hadn't nailed 'im to the perch 'e'd be pushing up the daisies! 'Is metabolic processes are now 'istory! 'E's off the twig! 'E's kicked the bucket, 'e's shuffled off 'is mortal coil, run down the curtain and joined the bleedin' choir invisibile!! THIS IS AN EX-PARROT!!”

Hmmmmmm, I would expect the Home Scretary to use another line in the sketch, perhaps the line where the owner of the shop said “ No no he's not dead, he's, he's restin'! Remarkable bird, the Norwegian Blue, idn'it, ay? Beautiful plumage!”

I’ll probably return to the examine the plumage of the revamped IMP in another blog. I won't use its new name yet just in case I'm not supposed to. But, if you creep along past bits of the Home Office today and listen very carefully, just every now and again you can hear the faint refrain: