They're changing the guard ... 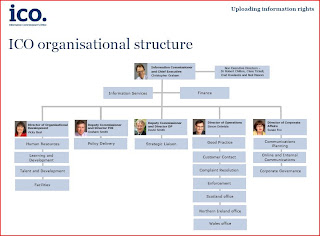 One of the ICO’s straplines is “uploading information rights”. And they’ve been practising what they preach. Yep, in a historic first, I’ve noticed that the team have recently published a chart on their website which sets out the Office’s structure. So now we are better informed as to who is responsible for doing what. It’s pictured on the left. And it can (or it could – depending on whether the link is broken) also be found by clicking on http://www.ico.gov.uk/upload/documents/library/corporate/practical_application/organisational_chart.pdf

You may know that there’s been a bit of a reorganisation going on up in Wilmslow. CVs have been polished. Suits have been dry cleaned. Haircuts have been had. Jobs have been re-applied for. And the mists are beginning to clear. And, no doubt things will get even clearer as the year rolls on.

These charts are useful. I remember, about a decade ago, working for a company that experienced a dawn raid which involved some bods from the European Commission and a bunch from the OFT. They arrived at "dawn", continental time, which was actually 8.30am. They didn’t wear combats or balaclavas, or carry any riot gear. One of the gentlemen from the European Commission did bring his own box of sugar substitute to put in his coffee, though, as he wasn’t certain that our canteen would have an alternative to the real thing. This was England, after all.

We did have an alternative, I remember proudly telling him. We had white sugar. And we had some brown sugar. Somewhere.

Anyway, the point of the story is that the first thing the “dawn raiders” did, so to speak, was to ask for an organogram, as they didn’t actually know who they should really be speaking to, now that they had actually got through the front door.

So, to all of my readers who haven’t quite managed to get through the front door at Wilmslow yet, who would you want to speak to if you had a problem?

Or, to plagarise the strapline from a series of iconic TV adverts that were broadcast at the end of the last century, "who would you like to have a one-to-one with?"

If you’re really lucky (or naughty), it will be straight upstairs to met Christopher Graham himself, who is now styled as the Information Commissioner and Chief Executive. But as he's a busy man, its more likely that someone else will offer you some coffee and a selection of jammy dodgers.

The organisation now appears to have been split into seven areas.

Five of these areas are led by named individuals, who are called Directors. And their photos have been published for everyone to see what they look like too. So you may well get to meet one of these instead (or as well as Christopher Graham).

David Smith is both a Deputy Commissioner and the Director Data Protection. He directs strategic liaison.

Graham Smith is also both a Deputy Commissioner and the Director Freedom of Information. He directs policy delivery.

Simon Entwisle is the Director of Operations. He directs 7 areas: good practice, customer contact, complaint resolution, enforcement, Scotland office, Northern Ireland office and Wales office. Whether he has more staff under his control than say Graham or David Smith is not clear. But as I’m not really a “people person” myself, I can’t say that I envy Simon for appearing to be responsible for more individuals than the Smiths. I much prefer to handle strategic problems, rather than personnel (or personal) problems. Give me a knotty strategic issue any day, compared with a bunch of unhappy team members to deal with!

The remaining 2 areas, Information Services and Finance, don’t yet appear to have Directors.

But these are early days, and it will be interesting to see who else gets what job, and how this helps Christopher Graham transform the Office into the world class organisation to which it aspires.

So, this is “freedom of information” in operation. Let’s congratulate these Directors on their recent appointments, and await further developments with interest, as the organogram mutates.
Posted by Data Protector at 14:13