What does it take to become a hereditory Peer? 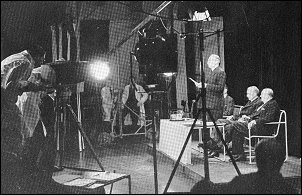 I was chatting away to (the current) Lord Selsdon (born Malcolm McEacharn Mitchell-Thomson) after the BigBrotherWatch bash last week, and then had a quick squint at his Wikipedia entry to learn a little more about him, in order that I could understand just how, having inherited his title, he has been trusted to become one of the nation’s legislators.

I did this because I was so intrigued by his closing remarks during the Second Reading of his Powers of Entry Bill in the House of Lords on 15 January: My father spent his life motor-racing and died at a young age. He always said, "You must never run out of petrol and you mustn't ever get stuck in the mud or snow". And his closing call to those attending the House of Lords debate indicated that he was determined to steer his Bill through Parlaiment: “Finally, I should just like to advise your Lordships that it is very important to have a starting handle. If you do get stuck in mud or snow you should always have a starting handle. The reverse gear in a car is the slowest gear. So you take the plugs out of your car, you put in the starting handle and you turn it in reverse gear, and you will get yourself out of any snow or any other mess. But on this particular project I do not have a reverse gear, so we will go on going forward.”

Just what sort of man is he, I thought to myself, and what did you (well, what did your your ancestors) have to do to get into the House of Lords in the first place?

It appears that his grandfather who was a very distinguished politician, serving as Chief Civil Commissioner during the General Strike of 1926, and who was subsequently given a hereditary peerage. (Life peerages just didn’t exist back in 1932). That Lord Selson then chaired the committee which enquired into the viability of setting up a public television service. So, he became one of the founders of the BBC, and appeared on the first day of BBC television broadcasts, on 2 November 1936, in his new capacity as Chairman of the Television Advisory Committee.

I’ve done some digging and have found an image of the first Lord Selsdon at the opening ceremony at Alexandra Palace, which can be seen from the top of my road. The text accompanying the photo, describing the event, uses the sort of language that can surely only be heard these days in the House of Lords: “Lord Selsdon, judicial chairman of the Government's television committee, the Post Master General, and the chairman of the BBC governors were joined by Adele Dixon, singing, and by a coloured pair known as Buck and Bubbles, dancing. But viewers possibly had better entertainment from the second edition of "Picture Page" which followed the ceremony, and introduced them to airman Jim Mollison, Miss Kay Stammers, Algernon Blackwood, a pearly king and queen from Blackfriars, and -for their first off-duty appearance- Elizabeth Cowell and Jasmine Bligh, the announcers.” If you want more of this priceless stuff, point your browser at http://www.teletronic.co.uk/herestv3.htm.

Anyway, back to the history lesson. Following his death in 1938, the peerage was transferred to the second Lord Selson, whose main claim to fame was as a racing driver. With co-driver Luigi Chinetti , he won the 24 hours Le Mans race in 1949. In 1963 the peerage passed to this current Lord Selsdon, who has spent much of his working life in the financial services sector.

So perhaps all I need to do to be created the “Count of Crouch End” is to have a grandfather who founded the BBC and a father who was a Le Mans winner. Not much to ask for ... but perhaps I ought not hold my breath. My father and grandfathers had a naval background. They didn’t found a single broadcaster between them, nor did they ever drive racing cars. I won’t make it through patrimony. Fortunately, not many others make it simply by inheriting such privileges these days, either.

... As an afterthought, I’ve just stumbled across one other person who is likely to preferred by patrimony thanks to a father with a motor racing background and a grandfather with political associations. This one is Michael Thatcher, who celebrated his 21st birthday yesterday. Michael is heir apparent to the honour currently conferred on his father, the 2nd Baronet Mark Thatcher, who achieved some notoriety when getting lost in the Sahara desert during the Paris – Dakar rally in January 1982. Mark Thatcher has also been asociated with other stuff, but I don't intend to refer to that here. Michael’s grandfather is Denis Thatcher, husband of Margaret Thatcher, who served as British Prime Minister between 1979 and 1990, and who was awarded the original hereditary peerage. Does Michael, like Malcolm, deserve a place in the House of Lords simply because his ancestors were associated with politics and fast cars? You decide.
Posted by Data Protector at 00:17