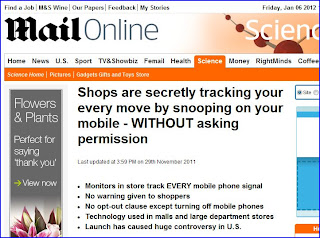 Apparently there’s not much real news at the moment, so some of the newspapers have filled their pages with stuff that really oughtn’t be read by sensible folk.

Yesterday, for example, I was reading about how:“Shops are secretly tracking your every move by snooping on your mobile - WITHOUT asking permission”. Oh, that sounds naughty. Time to rustle up a posse from the ICO to stop this stuff, or should we read on and work out just what is happening, and whether it’s actually causing anyone any harm?

When you actually read the article, it becomes clear that the headline writer evidently didn’t bother reading it, as if they had, I would have expected a much less sensationalist headline.

Quickly, you realise that it’s not the “death knell for privacy”, which was one the claims I read yesterday. Actually, it’s a great example of a “privacy enhancing technology” that renders a mobile phone user anonymous and still gives the retail centre the critical information it actually needs.

For the privacy wonks that bother about such matters, what actually happens is that the tracking technology which has been specially installed in various location in retail centres detects an electronic signature which comes from mobile phones. But, and here is the clever bit, the electronic signature that is detected from the mobile phone actually changes pretty frequently, for network security reasons. So, while the technology might well track what shops I visit in a retail complex today, it’s not able to work out, if I were to return to the retail centre tomorrow, that I was there today, and what it was that I was doing there today. So, it’s not able to build up a pattern of “my" behaviour.

And I’m glad to note that even BigBrotherWatch declined to adopt a sensationalist approach when they were offered the chance to publicise the “story”. Instead of couching their comments in shrill tones and exclamation marks, they reported on amicable and constructive discussions that had taken place between their representatives and the manufacturers of the ‘FootPath’ technology, manufactured by UK company Path Intelligence, which is used in some UK retail centres: “Customers are notified that the technology is in use by signs around the premises, but are otherwise unaware their movements are being monitored. There is a risk that companies will not publicise what equipment is being used to avoid negagtive publicity of this kind. FootPath should be applauded for their efforts to publicise what is going on, and they have been open and honest in talking to Big Brother Watch about their work. We have been assured that no personal information is collected, and that it is impossible to connect their data with the identity of handset owners, even at the request of the police. The company has reassured us that they only supply aggregate data on an hour-by-hour basis, and refuse to disclose individuals movements or provide real-time information.”

I’m so glad to have got that off my chest.