Cookies: The ICO’s "Man in Black" lays it on the line 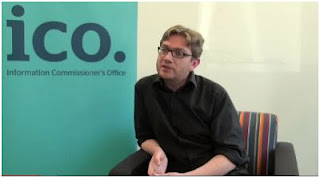 Many thousands of people will be flocking to the movies this weekend to see the new Men in Black 3, starring the amazing Will Smith and Tommy Lee Jones. A slightly smaller number will be roaming over to the Information Commissioner's website to see its latest video - starring its own man in black - the incomparable Dave Evans from the ICO's Business & Industry Team. Dave’s video only lasts 11 minutes 45 seconds. Not the 1 hour 46 minutes of the MIB3 version. And, Dave’s video has fewer jokes. And, no aliens. But, it’s still one of those “must watch” events for data protection folk – as he sets out the tone of the ICO’s cookie compliance enforcement programme.

What enforcement action will be taken by the ICO? Who is first in the firing line? How large will the fines be? These are the sorts of things that you’ll learn if your cursor ends up at http://www.ico.gov.uk/news/blog/2012/updated-ico-advice-guidance-e-privacy-directive-eu-cookie-law.aspx.

A very clever move by the ICO – as this sets a bit of a marker down to those other EC Member States that haven’t yet got around to doing much – or anything – about this cookie compliance stuff. Presumably the Article 29 Working Party will be far too polite as to criticise the ICO’s approach, and it means that other regulators who feel an urge to act tougher than our chums in Wilmslow may be persuaded to think again. After all, if regulators are to be encouraged to speak with a single regulatory voice, then the ICO’s approach ought to be commended to every EC Member State. It will be a pretty awful state of affairs if some other regulator slags the ICO off for being first to implement but not as purist as they would like to be when it comes to enforcing this part of a European Directive.

Oh well, at least I have something to congratulate the ICO for this week. I had announced that I would be donating £100 to the Help for Hero’s charity if the ICO staff were to upload a video to You Tube featuring various members of the ICO’s team singing the Cookie Warp, but that money seems destined to remain in my pocket. See my blog posting of 9 March for further details. Never mind, Dave’s starring role in this ICO production brought a wry smile to my face. He was speaking a lot of common sense. But that’s not necessarily what the more strident members of the Data Protection Taliban expect of a regulator. What out for him – he’s either going far, or he’s a marked man!

Image Credit:
Scraped from the ICO’s website. Watch out for Dave being interviewed on telly soon – he’s a natural communicator.