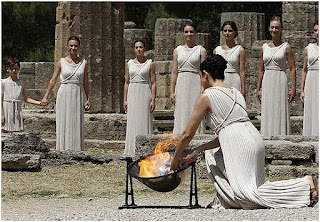 I dreamt of a disaster, last night.

In my dream, discussions with Danny Boyle, the chief organiser, deteriorated to such an extent that I formally withdrew from the Olympic Games Opening Show Committee. I had been contracted to help create one of the segments that illustrated something that the Brits do brilliantly, so that we could show ourselves off to a global audience in the best possible light, before that special torch enters the Olympic Stadium in East London on 27 July.

My idea, which had originally been accepted, was that we should show off something that we Brits do brilliantly badly pragmatically – ie data protection. Danny Boyle was keen to fill the arena with people being monitored on CCTV, with large teams of officials in X –ray specs rushing over to groups of, say, spectators, to give them a thorough search before grudgingly allowing them on their way. But everyone else pointed out that this would be happening both inside and outside the Olympic Stadium anyway, so why not show something slightly different to the world?

My idea was that we should create a short musical to commemorate the goings on in Wilmslow these past few years. After all, if a TV soap opera like Coronation Street can have musical made out of it that fills arenas, then why not Wilmslow’s greatest asset? To some (all right, not many), the reputation of the ICO towers over that of the celebrities that have recently been spotted in Wilmslow’s Sainsbury’s – such as Liam Gallagher, Patsy Kensit and Cristiano Ronaldo. Admittedly, celebrity spotting in Sainsbury’s is a lot rarer now that Waitrose has opened a store in the town.

Anyway, with more than a nod to the brilliant composer and lyricist Irving Berlin, who was born exactly 124 years ago yesterday, here are the lyrics I submitted – and which, to my great disappointment, have been rejected:

Doing one of the hardest jobs in town

There's no business like DPO business
Like no business I know
You get fair notice before the processing has started
That the server farm is based in Oregon
Your partner’s facebook page shows they and you have parted
You're broken-hearted, but you go on

There's no people like DPO people
They smile when they are low
Yesterday they told you you would not go far
You put that in your blog, now here you are
This morning on your office chair
They've hung a star
Let's go, on with the show

All hail, hail the DPO!