In the cold presence of pure evil 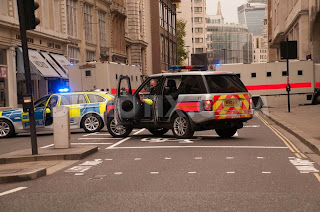 Have you ever had a paranormal experience? En route to Tuesday’s meeting of the Data Protection Forum, I encountered a scene where all my senses told me that I was in the presence of pure evil. I stood, transfixed to the spot, while what I can only describe as the spirit of the devil passed by.


I’m not making this up. It was 9.15am, and I was walking along a busy Blackfriars, some 50 yards from the Old Bailey. I heard the sound of police sirens. Four police vehicles helped two prison vans ignore the usual traffic restrictions and make speedy progress past me. Then, in a well rehearsed manoeuvre, the police vehicles blocked the roads, another dozen policemen appeared as if out of nowhere, automatic weapons were on full display, and the unseen occupants of the vans were driven more slowly into the body of the court building itself.

The police were on maximum alert, as if expecting an armed ambush at any moment.

Everyone was told to stay just where they were. And we waited, for a few minutes, as the vans disappeared into the Old Bailey. Silence. No-one spoke. And no-one objected to the momentary intrusion on their right to walk along the Queen’s highway. Many of us sensed who was in the vans, and that was enough to convince us that we should stay where we were for the time being. It was quite unsettling.

Then, without a word but with a series of gestures, the police melted away, and we were free to walk once again along the pavement.

I had not seen such a heavily armed (and impressive) police escort for a long time. But then again I had never before been in the presence of the two people who were being tried for the murder of soldier Lee Rigby.

Was it necessary for the state to put on such a mighty (and theatrical) show of force?

I’m not sure, but it certainly did the trick for me.

I didn’t mind momentarily giving up my human rights to walk wherever I wanted, to ensure that the accused pair could be safely delivered into the body of the court.

Just as I believe that many people don’t mind giving up their human rights to have their communications retained for a short time, in case it becomes necessary for a British investigator to seek legal powers to access them in the event that they get caught up in some terrorist plot.

When you’ve felt the cold presence of pure evil, your perspectives change.

Advance Notice:
Readers who are interested in such stuff might want to know that David Anderson QC, the Government’s Independent Reviewer of Terrorism, will be speaking at the Institute of Advanced Legal Studies on 24 February on “Scrutiny of terrorism laws: searchlight or veil?” In light of what we now understand the NSA to have got up to, it promises to be a really interesting session.


Image credit:
This is the scene, as captured by the great photographer Terry Scott, when the accused pair Michael Adebolajo and Michael Adebowale arrived at the Old Bailey the previous week, on 2 December.
http://www.demotix.com/photo/3399613/michael-adebolajo-and-michael-adebowale-arrive-old-bailey