Christopher Graham was in the House last Tuesday morning 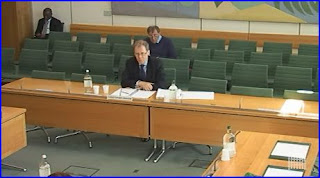 Pictures don't lie. Security was increased to such an extent at Portcullis House last Tuesday morning that the ratio of highly trained House of Commons security staff to members of the public numbered 1:1 for the appearance of the Information Commissioner before the Justice Committee. Actually, this is not quite true. For the first half hour of evidence giving, there were two members of the public in the Grimmond Room. But one of them was obviously overwhelmed with what he had heard, and had left by the time this image had been taken.

Security was tight (or “heightened” in official terms) because an international arms fair was taking place at the ExCeL centre in London’s Docklands, and those who are paid to worry about such things obviously thought that protesters might make a stab at disrupting the important work of Parliament, as they couldn’t get sufficiently close to the arms dealers down the river.

As for me, I wasn’t in Parliament last Wednesday. But the previous day I was a couple of hundred yards away, attending a meeting in Ministerial Conference Room B at the Department for Business Innovation and Skills. At BIS they didn’t take security quite as seriously as their colleagues at Portcullis House. After I had spoken to a harassed man in a fluorescent jacket who was minding the front door on Victoria Street, and who didn’t have my name on his list, I just ambled past him and shuffled over to a nice lady on the reception desk (who did have my name on her list). Then, I walked straight through the next (manned) security point with a work colleague, and we made our own way to the Ministerial suite on the 7th floor. This came as a quite bit of a surprise to the civil servants who were waiting to be told we had arrived downstairs, so that they could pop down, authenticate us as genuine visitors, and escort us back up to the (supposedly secure) suite of Ministerial Conference Rooms.

They certainly made sure they escorted us out of the building at the end of that meeting.

Anyway, let's get back to the plot.

If you want a good summary of Chris Graham’s remarks to the Committee, you can do no better than to point your browser to Chris Pounder’s Hawktalk blog. Or you can read the ICO’s press release. So there’s no need for me to say too much about it. Other than to echo the plea that the Leveson Inquiry (into, among other things, the general culture and ethics of the British media) should not be used as a ploy to further delay the introduction of custodial penalties for those who commit serious data protection offences. As lots of observers keep pointing out, until the "fines only" option is changed for more serious data protection offences, the courts simply don't have the ability to impose a wide range of penalties, such as community service orders, and suspended (or actual) custodial sentences. Thank goodness for the Computer Misuse Act, and for the Proceeds of Crime Act, which do have penalties that prop up the pretty light regime introduced for DPA offences. Oh yes, and the Misconduct in Public Office offence, which can sometimes be applied, too. That one carries a maximum sentence of life imprisonment. I kid you not.

And, if you can believe it, it now appears that the Crown Prosecution Service are trying to use the Official Secrets Act to get to the bottom of various cases where personal information had been awfully abused. That Act carries a maximum custodial penalty of two years and an unlimited fine.

My plea to the legal academics who read this blog is simple: please ask a couple of your brighter students to write a dissertation entitled "Who's been a naughty boy, then?" The purpose would be to create an analysis where (essentially) the same acts were committed by, say, medical students, bank employees, DVLA officials, police officers, soldiers, journalists, phone company employees and ICO staff members, etc. Then, we might all appreciate what the entire range of criminal, civil (including employment law) and regulatory penalties is that might be applied to that miscreant and to their employer. I am certain that it will make very interesting reading.

Now let’s hope that, for future appearances before Parliament, there may be many more members of the public who will make the effort to turn up and listen whenever Christopher Graham is invited to give any evidence. If we’re not careful, we might give the impression to the casual parliamentary TV viewer that no-one cares about data protection. We can do better than that. It’s always better hearing this stuff at first hand.

And, if you behave yourself, you can even try to have a few private words with the Commissioner, afterwards.

Postscript:
Many thanks to those who have recently bought a copy of my Book, “From Fear to Hope”. (For more information, see my blog posting dated 13 September) After just 5 days on sale, I’m told that it’s stormed the Amazon’s best sellers list, and is currently their 48,976th most popular book. It’s slipping down the chart, as earlier today it had hit the dizzy heights of number 46,839. Let’s see what we can do together to get it into the top 25,000!