Yes, I think they’ve actually gone and done it 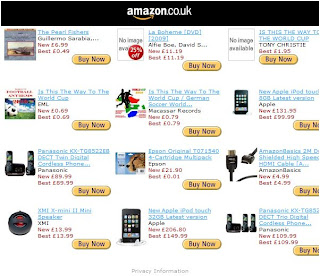 Yesterday, I wondered just how clever Amazon’s behavioural advertising capabilities were. I set them a test. First, I had recently placed an order for a vuvuzela – the loud stadium horn, as used by soccer fans in stadiums in South Africa. Then all I had to do was to wait and see what sort of behavioural advertising messages Amazon would start sending me. Would I get adverts for products that were similar to vuvuzelas?

Today, I found out - and I’m impressed.

To put the advert in context, I had just been reading an article about a recent performance of the “Pearl Fishers” at the London Colesium, where the lead tenor, Alfie Boe, was ill, as became his understudy, so the audience were treated to someone plucked from the ENO chorus to sing the really hard bits.

At the foot of the article was a space where the webmaster had presumably provided a site for advertisers to offer readers their wares. And fancy that - guess what advert Amazon has just served in that space?

(Well, I’ve snipped it and it’s posted on this blog, for all the world to see).

Amazon has served me adverts for 12 different items, which feature:

And well, what a co-incidence! I wonder what 11 of these 12 items have in common – music, football championships, and devices for making noises?

Could it be that Amazon have decided to send behaviourally advertising messages to a device used by someone they know to have recently shown an interest in vuvuzelas?

I think they have.
Posted by Data Protector at 14:12