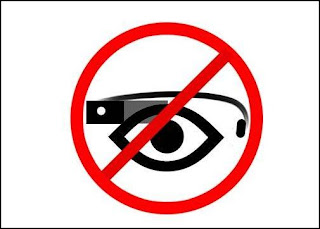 If you know where to go in the state of Washington in the USA, you’ll spot this clever example of privacy iconography.

Before they have been officially released, a campaign has started to discourage Google Glass geeks from recording material that really ought to remain private. Seattle’s 5 Point Cafe claims to be the first Seattle business to ban in advance Google Glasses. It’s not just a gimmick to encourage people to use the device. I think it's more an attempt to protect a business, When your advertising strap line is “Alcoholics serving alcoholics since 1929”, you can understand why your clients might not want to draw too much attention to themselves.

Not everyone wants to be photographed enjoying a great breakfast with a Bloody Mary in a pint glass, no matter how rejuvenating it is.

As the cafe management recently explained on it's Facebook page to someone who suggested that this was just a publicity stunt: "Look, we threw a customer out for taking an unwanted photo of another customer with his smartphone not too long ago. Google glasses have the ability to video tape and post to the web. Many of our regulars want to be anonymous, and we appreciate that. If you want to wear Google glasses, cool. But you aren't allowed to wear them inside The 5 Point. Wear them outside, take them off inside. We're promoting respect."

So, how will cinema and theatre attendants deter Google Glass wearers from recording these shows prior to uploading them on the Internet for anyone to enjoy? Those keen on digital rights management could be in for a fun time.  This may well be a game changer in the entertainment industry. And for the rest of us, too. How will court ushers, for example, ensure that legal proceedings aren’t recorded? But at least we may finally get to know what goes on when a jury retires to consider their verdict.

And how will this product ever get accepted by some of the German data protection regulators, given what they already think of the Street View service?

Perhaps the Article 29 Working Party might be persuaded to write an opinion on such a game changing device. And, if we were to wear Google Glasses while reading it, perhaps a Google translation service could decipher the text and present the reader with an analysis of what the authors actually meant to write.

[Note to Google Glass project team:
Yes, if asked, I would be delighted to take part in a UK Google Glass trial. And to blog about my experience. Please feel free to get in touch. You know where I am.]