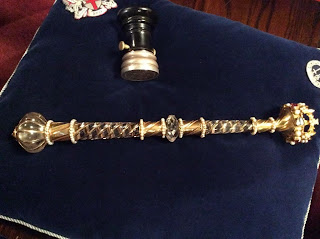 How should an incoming Information Commissioner start his first day at work in Wilmslow?

I pondered over this question as I sat in London’s Guildhall yesterday, witnessing the famous silent ceremony, when the Lord Mayor of London is formally admitted into this historic office. The only words that were spoken were those by the Lord Mayor Elect as she (yes, it was a she for only the second time in history) made her promissory oath. What then followed was a rather elaborate ballet where formally attired dignitaries advanced to the Lord Mayor’s chair, made silent reverences and offered tokens of the City of London, and then retired with said tokens, after having made further silent reverences.

After the ceremony, I was allowed to hold the Lord Mayor’s sceptre (pictured, along with the current seal of the City of London) – which contains, in the centre, a piece of rock crystal that was carved in the Anglo Saxon period. This 18” baton is over 1,000 years old. The shaft is spiral, inlaid with gold with pendant pearls, uncut rubies and sapphires. Before there was a King of England, this was the staff of office of the ruler whom Londoners elected each year. It really was a great privilege to hold such a historic (and priceless) object.

So what ceremony ought accompany the Information Commissioner on his first working day in Wilmslow?

If ever asked by the Lord Chamberlain’s Office for some ideas, I would probably offer something like this:

The incoming Information Commissioner is admitted to Wycliffe House on the Friday next preceding the second Saturday after his appointment has been ratified by the Secretary of State for Justice.

On the morning of the admission, senior member of the ICO’s management team meet the incoming Commissioner at the Slug & Lettuce bar in Water Lane (just across the road from Wycliffe House), where drinks are served.

At 11.25am, the Commissioner, wearing a hat, leaves the Slug & Lettuce for Wycliffe House, in state, attended by the Deputy Commissioners, who are carrying their hats, other members of the Executive Team and the Management Committee, who don’t have hats.  The Commissioner’s Macebearer, who wears the best hat of all, also carries the Commissioner’s warrant.

The route from the Slug and Lettuce to Wycliffe House is lined by ICO staff, 5 paces apart, in order of seniority.

At 11.28am the Commissioner is greeted at the door of Wycliffe House by the Head of Security who, after making three reverences, receives the Commissioner’s hat, and invites the Commissioner to sign for his personal locker key, and then sign a declaration to confirm adherence to the organisation’s clear desk policy.

The Commissioner signs for his personal locker key and the clear desk policy declaration, and is given back his hat. The Head of Security retires, making three reverences.

The Head of IT then advances, making three reverences, and presents, on a velvet cushion, the encrypted data stick which belonged to the former Information Commissioner, to the incoming Commissioner.

The Commissioner commands the Head of Security to destroy the data stick with the Francis Aldhouse Memorial Hammer.

The data stick is placed on the floor, and is given a mighty whack with the hammer, smashing it into pieces.

This signifies that all secrets held by the former Information Commissioner will remain, for evermore, secret.

The doors of Wycliffe House are now flung open and the Commissioner, preceded by his Macebearer, the Deputy Commissioners and the Management Committee, advance and walk up the stairs to the Commissioner’s desk in a corner of an open plan office on the first floor.

As the Incoming  Commissioner’s left foot lands on the first tread of the stairs, members of the ICO chorus, accompanied by the massed bands of Wilmslow’s Boys Brigade and the Girl Scouts Association, begin singing the first 5 verses of  “There’s no business like ICO business”.

When the Commissioner, the Commissioner’s Macebearer, the Deputy Commissioners and other members of the Executive Team and the Management Committee can no longer be seen by anyone standing in the ground floor reception area, the doors to Wycliffe House are locked shut to keep the oiks out.

And the town of Wilmslow returns to its usual state.