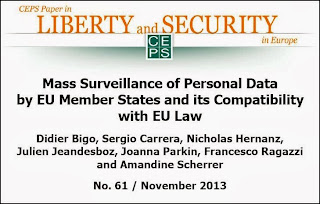 I’ve avoided commenting on matters relating to the Snowden revelations.

But, having sat through yesterday’s session of Parliament’s Intelligence & Security Committee, where the heads of our foremost intelligence agencies were politely questioned for an hour and a half, I’m ready to break my vow of silence.

I’ll do it by drawing attention to a recently published paper on “mass surveillance of personal data by EU Member States and its compatibility with EU law.” It was commissioned as a briefing paper by the European Parliament’s LIBE Committee in the wake of the Snowden revelations.  The paper is remarkably brief too – just 65 pages long, which is virtually nothing by European data protection standards.

I’m very grateful to Volodymyr Kozak, the Deputy Head of the State Service of the Ukraine on Personal Data Protection, for drawing my attention in to it.

If you want to know just what the Swedish, French, German and Dutch Governments (but not the Ukrainians) have got up to, then this is the place to start. I’m not sure anyone will learn anything new about what the Americans or we Brits have been alleged to have got up to, as that material has already been subject to a lot of publicity. The capacities of Sweden, France and Germany (in terms of budget and human resources) are low compared with the operations launched by Britain and the USA – but then again, I venture to suggest, so is the national security threat to those countries. When it comes to intelligence capabilities, we plucky Brits lead our European colleagues by a country mile. But we are not the only Europeans who are engaged in such activities.

The authors (a small team of academics) make some decent points – in that there has recently been a reconfiguration of surveillance that enables access to a much larger scale of data, that it’s the purpose and scale of surveillance that are at the core of what differentiates democratic regimes from police states, and that in turn this raises the issue of the accountability of intelligence services and their private sector partners.

I disagree, however, with their recommended remedy – which is that, inter alia, that the European Parliament has a role to play in ensuring sufficient trust and confidence among European citizens.

The remedy has to lie at the national level, and with the integrity of the actors who are involved at all levels of spookery. As the Head of GCHQ said yesterday in Parliament, his staff would refuse to listen to intercepted conversations if they felt that what they were doing was wrong. I believe him. In an earlier part of my working life, I spent over a decade working with people involved in this area.  The overwhelming majority have struck me as behaving with the utmost integrity. I’ve met lots of genuinely nice folk who care about the work they do and respect the different cultural and social values they are protecting. What we need are stronger mechanisms to assure citizens that the appropriate controls are in place – and I have far more confidence in controls that can be implemented at a Nation State level than at an EU level.

British national security laws are firmly based on the European Convention on Human Rights. I’m really not sure what added value could be offered by greater legislative controls emerging from the European Parliament.  I don’t feel sufficiently qualified to offer similar assurances about the legislative and procedural controls that currently exist in Sweden, France, and Germany.

And I’ll keep my views on the controls that govern the NSA’s activities to myself for the time being.