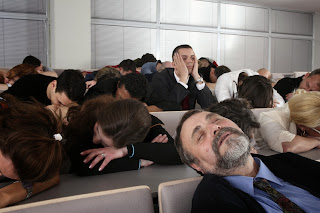 The usual suspects were strutting their usual stuff at a panel session on communications data, surveillance and privacy in Westminster last week. Me included. I joined a panel that featured Assistant Chief Constable Martin Beautridge from Kent & Essex police, Jamie Bartlett, Head of the Violence & Extremism programme at Demos, and Gus Hosein from Privacy International. Chaired by Chi Onwurah MP, we all agreed that there was a lot we shared in common, and only a few issues where there were key differences in opinion.

Will anything change as a result of this exchange of views? Unlikely, I fear. Just as very little will change following the meeting tonight at the Royal Institution of British Architects on mass surveillance. A few livers will feel the effects of dealing with an awful lot of alcohol in an awfully short period, but that’s what you get when you get a load of policy wonks in a pub after an earnest night agreeing with everyone else in the room.

Too many of these meetings are too one sided. No-one really changes their opinion. Indeed their whole purpose seems to be to bind people together and make them realise just how wrong the other side actually is. If only “they” could see things from “our” perspective.

Regardless of the side you’re on, everyone appreciates that the spooks occasionally need to access information that would normally be considered private, and that there ought to be checks and balances in place to make sure that they don’t abuse their privileged position. But who guards our guardians? Some think it ought to be the judiciary. Others think it ought to be a crack team of poachers turned gamekeepers.

I still think it should be me.

Since no minds will be changed tonight, I won’t be attending the event at RIBA. I’ll pop over to a friend’s fireworks party instead.

Then, I’ll finish my preparations for London’s great event of tomorrow – where members of the London Information Rights Forum will be assembling to hear a range of dynamic speakers present on a range of topics that are on the tip of every data protection professional’s tongue. And me.

My theme, tomorrow, is not on communications data or mass surveillance. Instead I’ll be focussing on an initiative the ICO has been banging on about for a few years – that of privacy impact assessments. But, rather than bore everyone to death with detailed instructions on how to do them, I’ll be telling them the spooky tail of some cunning plans that are being hatched deep within the European Commission. These plans could turn PIAs into a tool that will keep us data protection folk gainfully employed for a long time to come.

Much longer than we probably want to be gainfully employed for, come to think of it.

And they’re likely to keep some of us awake all night, too.

But I’ll expand on that theme in a later blog.