A suitable retirement gift for the EDPS 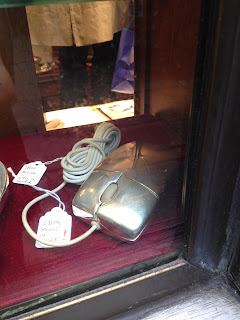 The Crouch End Chapter of the Institute of Data Protection held a fractious meeting a few nights ago.

What retirement gift could be presented to the outgoing European Data Protection Supervisor, as a token of the esteem that he has been held for oh, so many years?

Or, as another wag put it, what useless but expensive trinket might do the trick?

There was much debate about whether any gift was appropriate, given his contribution to the simplification of data protection rules, and the fact that it’s only been 2 months since he received his last award, which came from the Confederation of European Data Protection Organisations.  Eventually, the majority opinion was that he might appreciate a silver computer mouse, with hallmarks from the London Assay Office, and preferably one that would actually work with a really old computer.

All we need to do now is to raise the necessary funds. It’s a snip at £450. But the pockets of the members of the Crouch End Chapter of the Institute of Data Protection are not bottomless, and I still need to raise a bit more money.  Actually, I need to raise another £447 to meet the target.

So, if there are individuals deep in cyberspace who are so inclined, I would be grateful if they might get in touch in the usual manner and pledge their donation. No monies will be asked for until it is absolutely clear that, collectively, donors have pledged this outstanding £447.

If the funds are forthcoming, I’ll arrange for it to be presented to him at the Computers Privacy & Data Protection Conference in Brussels next week. If I can’t raise the funds by then, I’ll tell him where he can go to buy it himself.