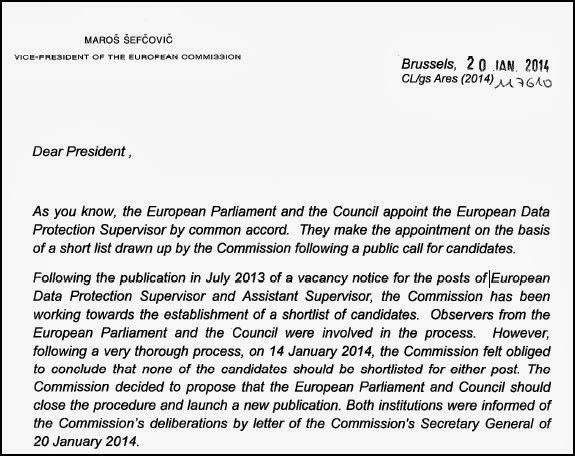 I am grateful to my chums at Statewatch for having placed in the public domain a recent letter from the European Commissioner for Inter-Institutional Relations and Administration to the President of the European Parliament, shedding a little more light on what is going to happen next concerning the matter of the appointment of a new European Data Protection Supervisor.

Anyway, as indicated in last Friday’s blog, the current EDPS (and his assistant) will continue in office until 16 October 2014, during which time the selection process will be re-run.  Helpfully, and in response to the international clamour for more details about the selection process, we now know a little more about what the candidates go through. Applications are reviewed by a Consultative Committee on Appointments, “composed of high ranking civil servants who have great experience in evaluating candidates for senior positions at EU level.” Candidates can also expect the decision of this committee to be reviewed by “Representatives of the European Parliament and the Council.”

This time round, previous candidates can reapply, and there may be a different selection process for the EDPS’s Assistant.

Interestingly, the letter suggests that the EDPS’s job description (but not necessarily that of his Assistant) may be revised to highlight the need “to work at high international level and to lead the EDPS in facing future changes in an environment of rapid technical evolution with high political, economic and social sensitivity.”  This job description would certainly fit the high-flier whose identity was revealed to me last week, but who will is currently unlikely to be available until the autumn.  They would be an absolute shoe-in.

If any of this criticism was particularly directed at this blog, then I’m happy to point out that I've never identified the individuals and candidates whom I've spoken to, and in any event I would never have needed to comment on the situation if the Commission had not been so opaque in the first place. It was not in the interests of the Commission to keep so quiet about this legitimate matter of public interest. The Commission’s failure to be more transparent about its own processes simply encouraged the media speculation. The Commission should not criticise others for its failure to media manage this issue.

As I pointed out last week: “It’s a sophisticated machine, the European Commission. And, in the end, all will turn out for the good.

(For the European Commission, that is.)”