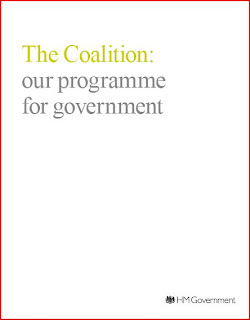 Wow – in the space of just a few days, a revolution has blown through Whitehall. Gone are the days of “I wonder what they will do now they've won the election” to “We now know precisely what they intend to do now they've won the election.” What an amazing change. Fancy that, an incoming administration actually being transparent about the manifesto commitments it will endeavour to implement, and which it will drop. No incoming administration has ever been so frank before - at least in my lifetime. How things are getting better!

And the good news continues. My predictions about the issues which the coalition parties might agree to promote were very accurate. I remember the days when “Mystic Megg” offered her predications about the winning lottery numbers. Where is she now? Perhaps she saw the competition on the horizon. Perhaps I should take an interest in the horses now, too!

Anyway, for those who don’t feel too inclined to read all 36 pages of the agreement, here’s the significant data protection commitments. No specific mention of a commitment to support the Information Commissioner’s Office – but there is quite a lot to be thankful for:

We will be strong in defence of freedom. The Government believes that the British state has become too authoritarian, and that over the past decade it has abused and eroded fundamental human freedoms and historic civil liberties. We need to restore the rights of individuals in the face of encroaching state power, in keeping with Britain’s tradition of freedom and fairness.
• We will implement a full programme of measures to reverse the substantial erosion of civil liberties and roll back state intrusion.
• We will introduce a Freedom Bill.
• We will scrap the ID card scheme, the National Identity register and the ContactPoint database, and halt the next generation of biometric passports.
• We will extend the scope of the Freedom of Information Act to provide greater transparency.
• We will introduce safeguards against the misuse of anti-terrorism legislation.
• We will further regulate CCTV.
• We will end the storage of internet and email records without good reason.
• We will introduce a new mechanism to prevent the proliferation of unnecessary new criminal offences.
• We will establish a Commission to investigate the creation of a British Bill of Rights that incorporates and builds on all our obligations under the European Convention on Human Rights, ensures that these rights continue to be enshrined in British law, and protects and extends British liberties. We will seek to promote a better understanding of the true scope of these obligations and liberties.


On Communities & Local Government:
The Government believes that it is time for a fundamental shift of power from Westminster to people. We will promote decentralisation and democratic engagement, and we will end the era of top-down government by giving new powers to local councils, communities, neighbourhoods and individuals. .
• We will give councils a general power of competence.
• We will ban the use of powers in the Regulation of Investigatory Powers Act (RIPA) by councils, unless they are signed off by a magistrate and required for stopping serious crime.


On Government Transparency:
The Government believes that we need to throw open the doors of public bodies, to enable the public to hold politicians and public bodies to account. We also recognise that this will help to deliver better value for money in public spending, and help us achieve our aim of cutting the record deficit. Setting government data free will bring significant economic benefits by enabling businesses and non-profit organisations to build innovative applications and websites.
• We will create a new ‘right to data’ so that government-held datasets can be requested and used by the public, and then published on a regular basis
• We will require all councils to publish meeting minutes and local service and performance data.
• We will require all councils to publish items of spending above £500, and to publish contracts and tender documents in full.
• We will ensure that all data published by public bodies is published in an open and standardised format, so that it can be used easily and with minimal cost by third parties.

And, for those who are inclined to read all 36 pages of the agreement, here’s the link: http://www.direct.gov.uk/prod_consum_dg/groups/dg_digitalassets/@dg/@en/documents/digitalasset/dg_187876.pdf
Posted by Data Protector at 12:55