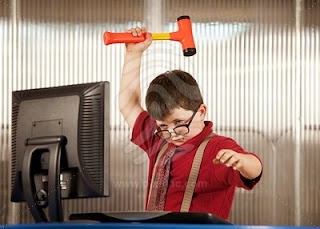 I’ve recently been reading some stuff about child safety online, as I’ve heard that some of the childrens’ charities have argued that internet service providers have not acted with sufficient vigour to prevent activities that cause considerable harm to young people. And, from what I’ve read, these charities want the regulators to take a much firmer stance against the providers for their failures to respond in an sufficiently adequate manner. It’s awful, it’s disgusting and it shouldn’t be happening. Much more must be done.... blah blah blah ...

I was then shown a document that goes by the thrilling title of the “Final Report of the Internet Safety Technical Task Force to the Multi-State Working Group on Social Networking of State Attorneys General of the United States.” Published by a group of experts at the very end of 2008, it provided an interesting take on the issue – which obviously was not supported by all of the Task Force members. When dealing with issues such as these, I’m sure that passions run high and differences between the stakeholders (and experts) are often principled and irreconcilable.

I’m about to summarise some of the main points raise by the report, and must warn you, dear reader, that some of these thoughts are shocking. If you are easily shocked, please don’t read the rest of this blog. I don’t want you to get upset by reading other people’s views on the reasons behind such nasty behaviours. If you want an easy life, please read another blog. Please don’t complain to me that you are shocked at what the report states. Or that you are shocked at the way I’ve so crudely condensed the report.

OK. Here goes. Take a deep breath. And another one. Now, have a squint at these excerpts, which consider that the risks minors face online are complex and multifaceted and are in most cases not significantly different than those they face offline, and that as they get older, minors themselves contribute to some of the problems. In broad terms, the research to date shows:

• Sexual predation on minors by adults, both online and offline, remains a concern. Sexual predation in all its forms, including when it involves statutory rape, is an abhorrent crime. Much of the research based on law-enforcement cases involving Internet-related child exploitation predated the rise of social networks. This research found that cases typically involved post-pubescent youth who were aware that they were meeting an adult male for the purpose of engaging in sexual activity. The Task Force notes that more research specifically needs to be done concerning the activities of sex offenders in social network sites and other online environments, and encourages law enforcement to work with researchers to make more data available for this purpose. Youth report sexual solicitation of minors by minors more frequently, but these incidents, too, are understudied, underreported to law enforcement, and not part of most conversations about online safety.

• Bullying and harassment, most often by peers, are the most frequent threats that minors face, both online and offline.

• The Internet increases the availability of harmful, problematic and illegal content, but does not always increase minors’ exposure. Unwanted exposure to pornography does occur online, but those most likely to be exposed are those seeking it out, such as older male minors. Most research focuses on adult pornography and violent content, but there are also concerns about other content, including child pornography and the violent, pornographic, and other problematic content that youth themselves generate.

• The risk profile for the use of different genres of social media depends on the type of risk, common uses by minors, and the psychosocial makeup of minors who use them. Social network sites are not the most common space for solicitation and unwanted exposure to problematic content, but are frequently used in peer-to-peer harassment, most likely because they are broadly adopted by minors and are used primarily to reinforce pre-existing social relations.

• Minors are not equally at risk online. Those who are most at risk often engage in risky behaviors and have difficulties in other parts of their lives. The psychosocial makeup of and family dynamics surrounding particular minors are better predictors of risk than the use of specific media or technologies.

• Although much is known about these issues, many areas still require further research. Forexample, too little is known about the interplay among risks and the role that minors themselves play in contributing to unsafe environments.

What’s the key learning to this? In my view, it’s that internet service providers are going to struggle if they are to be considered solely (or principally) responsible for securing child safety. Greater safety is associated with parents assuming a greater degree of control over their offspring.

What’s this? Blame the parents rather than the internet? That’s a bit political and near the bone.