Careful: this image is not available on Streetview 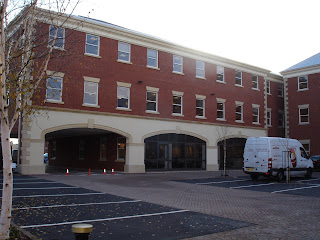 Yes it is. It’s not (quite) visible from the street – so a Google Streetview camera wouldn’t be able to capture this image as the car cruised along Water Street in Wilmslow.

So this may be its first public outing.

It’s the extension which has just been built to accommodate all of the Wilmslow-based Information Commissioner’s staff in a single building. And the office environment is very, very different to what it was before.

Formally opened last month by local MP, George Osborne, motivational slogans are painted on the walls. Stuff about empowerment, rather than pay. Open plan. Clear desk policy. Nice coffee. New carpets. And the Commissioner works in one of the corners, rather than in an office of his own.

Minutes after taking this image (earlier today), an official from Internal Compliance scampered over to ask me who I was and what I was doing. We couldn’t think of a good enough reason for me not to keep the image, so here it is.

It makes a change from gazing at the Streetview images of babies being born, naked men in car boots, dead bodies and people wearing horses heads. Admittedly, those images are cooler!