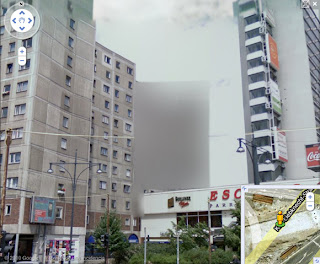 The German Data Protection regulators made a pact with Google before its Streetview service was allowed to be launched in that great country.

The deal was that the service could go live so long as people who didn’t want their properties to be visible were allowed to ask for them to be blurred.

And this image is the result. If you live in a block of flats, you have the right to mask your personal data (?) by masking the entire block. Don’t ask me what rights the other residents in the block have to insist that their flats be unmasked. It appears that in such cases, the wishes of the many (who want to be visible) can be vetoed by the actions of the few (well, by a single objector, actually).

Der Spiegel Online reports that 244,000 objections have been received - and their properties have been blurred. That’s some three per cent of the total number of properties which were captured by Streetview. The other 97% apparently aren’t sufficiently bothered to object.

But in this context, is a home really something that we would sensibly recognise as “personal data”? It looks like an inanimate object to me. I don’t know the identity of the owner (or the tenants) in the building that’s been blurred out, and I guess I never will. And nor do I want to. I just wonder what checks Google made to verify that the objector was actually owning or living in that building. And whether any of the non-objectors were consulted, too.

What is Google supposed to do when the owner of the house has, following a subject access request, decided that the information in the database is inaccurate? Does Google have an obligation to return to the area to take an updated image of a freshly painted building, or to photograph new dormer windows that have just been installed in the roof? 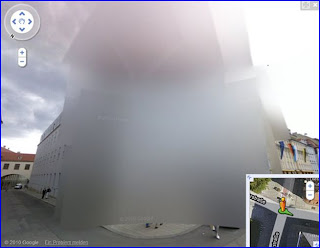 The Register has, helpfully, given us some indication of the checks that Google makes when it receives an instruction to blur the images of a building. Apparently, some clown contacted Google and demanded that they blur one on a street corner in Munich. Which they did. Before realising that they were actually blurring the Munich offices of, er, Google.

You can’t make it up.