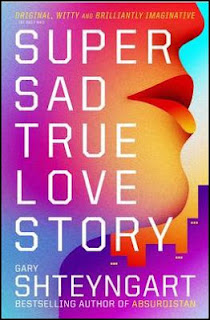 It’s taken me almost a year to do something I used to do all year.

And no, it’s not 50 shades of anything. It’s a modern novel with a data protection theme – which was highly recommended by some chums I ran into at the IAPP congress when it was held in London, late last year.

The title – “Super sad true love story”. The author - Gary Shteyngart. I’m not going to give away the ending – other than to reflect on the plot, which is to ask whether, in an information rich world, it is possible to survive an economic collapse. An information superhighway will not necessarily lead to liberty for all.

Enough said about the book. It must have taken the author a long time to write it, and I don’t want to affect its commercial impact.

But it did bring home a point that I’m becoming firmly aware of.

And that is about how I consume literature, or knowledge, these days.

Perhaps I read too much for professional purposes – but at the end of the day I really can’t face sitting down to read another, physical, book. I’ll go to a theatre at the drop of a hat to experience live entertainment, or to a concert or the cinema, and I love reading short, punchy, material when it’s presented to me on-line, but I find it so hard to sit down and pick up an actual book. What gets most thumbed in my household is my Penguin rhyming dictionary, not some piece of modern literature. Books are getting too long, there aren’t enough pictures, and when I put it down, I like the device to remember where I left off.

So if I can’t be bothered to read long texts anymore, why should real people feel bothered to read the privacy policies that are so carefully crafted on-line? Surely, if you’ve enough time to read a real novel (or even something ghosted for Katy Price), you’ve got time to look at the fascinating stuff that lurks just beyond the “privacy policy” tab.

How might we be able to bring this stuff to public attention, then?

The answer came to me as I was flicking through the You Tube web site to catch a few more truly horrific, car-crash TV style, examples of auditions by X Factor contestants. Why can’t major corporations commission short, punchy videos featuring well known personalities to explain the privacy policies to their users?

I’m sure some of the corporations would jump at the idea. I can already imagine Sir Richard Branson dressing up as an airline pilot, train driver, ISP engineer or holiday rep to front his airline, rail, ISP and holiday ventures.

Data controllers wanting to remain respectable could hire Stephen Fry. The Queen could do it for the Royal Mail.Or Rolf Harris for the RSPCA. Date controllers at the dodgier end of the spectrum, equally, could book Del Boy and Rodney to tell it straight.

Who says that privacy policies have to be boring?

(Or even, actually, written down?)

Special prizes will be awarded to contestants who send me ideas as to the most appropriate personality for presenting a particular data controller’s privacy policy.


Image credit:
It took almost a year, but I’ve finally read it from cover to cover.