Setting goals, or bumming around? 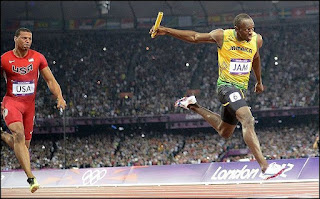 I like this image. It represents a winner who has achieved his goals. But take a close look at the expression on the winner’s face. It doesn’t look that celebratory to me. In the winner’s words, during an interview the day after his incredible achievement, he spoke about the predicament he was in. Yes, he was on the top of the world. But so many talented youngsters were sprinting hard on his heels. After winning a third gold medal in the London Olympic games, the mighty Usain Bolt pointed out that he now needed to reassess his athletic career: "I've done what I wanted to do. My coach and I will discuss what we need to. But right now I have no goals, I'm just like a bum."

I wonder how many data protection officers face a similar predicament. Not the predicament that global megastardom is guaranteed after having reached the pinnacle of an exceptional career, but the predicament that its actually quite hard to motivate yourself every day, especially when the regulatory future is pretty uncertain. And, when you’ve just returned to work after enjoying a relaxing summer holiday.

So what ought data protection officers do, as this mega juggernaught of a European Data Protection Regulation slowly makes its way through the intestines of a number of European institutions, attended by teams of policy officials from each of the Member States, each stakeholder trying to fashion this monster more in their own image than that of anyone else.

Do we believe the recent claim that under the Cypriot Presidency, the EU is moving into fifth gear, rather than first gear, as it works on the proposals, or is that just another sound bite from a Commission official?

It’s not easy for data protection officers at the moment. Until everyone has a better understanding of the likely outcome, it’s really hard to plan to turn a corporate data protection policy around so that it faces the same direction of the new European policy, or at least, so that, in a few years time, their trajectories will cross.

Given the virtual policy vacuum that this has created, how do data protection officers get their daily inspiration to ensure that their companies, in data protection terms, perform even better each day? What juice exists to power the consciences of this band of few, this special group of souls, these hearty heroes, to get to work and deal with the “same old, same old”. What stops us from turning into the type of bum that even Usain Bolt fears?

Perhaps Sir Paul McCartney had it right, as he sang that wonderful refrain from the end of the Beatles album, Abbey Road, at the end of the opening ceremony of the London Olympics. Only he was talking about love.

As for me, I’m talking about inspiration, motivation, drive, willpower, determination, stamina, desire, endurance, motivation, passion and good old-fashioned niceness. It comes down to knowing what it is that you really want to achieve, with ought necessarily waiting for the regulatory juggernaught to overtake you. It’s about adopting the right attitude to work:

Or, as Sergeant Stan Jablonski used to say at the beginning of every episode of the 1980’s American television cop show Hill Street Blues: