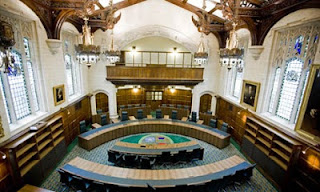 A landmark case will be heard shortly in ‘Blighty. It might clarify a few misgivings about whether it is right for organisations that depend on public funds to be deprived of public funds when their funds were not spent with sufficient speed to prevent a personal data breach.

What am I talking about?

I don’t want to say much about the appeal – other than to confirm that it won’t be held in the Supreme Court, which is the subject of today’s image. It will, however, be held in an equally historic venue, and I suspect that Data Protection Officers – and regulators – will be discussing the ramifications of the decision (or the appeal of the decision, if it comes to that), for many months to come.

Remember remember
The third of December
An edifying spectacle – not
As the parties assemble
At least one may resemble
By the end, a bit of a clot

Roll up, roll up
For an experience quite surreal
Will the parties do a deal
Before facts that are quite unreal
(Which some might well prefer to conceal)
Are laid before judges most genteel
The Tribunal hears the great appeal

What will all this teach us?
What will we all discuss?
Whom will we all cuss?
(And aren’t we all so grateful it didn’t involve us)