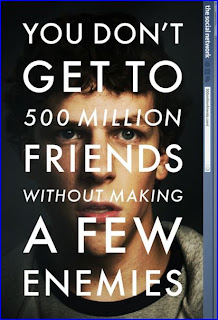 I was extremely impressed with “The Social Network”, which has just opened in all good cinemas. Rush to see it and marvel at the way the site that Mark Zuckerberg is so closely identified with was created.

So how old is Facebook? I was stunned to appreciate that it was just in September 2003 that the germ of an idea cropped into his mind and he began work to develop the concept, prior to its actual launch in February 2004. What else happened in September/October 2003 – what can I use to jog my memory? I’ve tried to recall other events that happened around that same time – but it’s not easy to find anything really memorable incidents. Michael Howard was about to be elected Leader of the Conservative Party, the IRA were decommissioning more weapons, there was a war in Iraq, and it was the second anniversary of the 9/11 attacks in America.

And what’s the film about? Well, it basically just tells a story of a Harvard University geek who gets dumped by his girlfriend, reeks revenge by writing a pretty savage blog about her, and then (still drunk) hacks into many of the college computers to amass an address list of Harvard students who subsequently get invited to a website which invites people to rank the Harvard University girls in order of their sex appeal. Needless to say, it becomes so incredibly popular that it brings down the university’s servers within hours. By the time Zukerberg is sober, it’s time to face the university authorities. It’s also time to face a new range of challenges from a wide range of people – and as the Facebook concept grows, he drifts away from his best friend and business partner.

I won’t say much more about the film, other than to note the way in which the prospect of making vast amounts of money can generate so many disagreements between super smart people. Its brilliant fun, and I am delighted that the key players in the story have so generously allowed the film makers to present such a “warts and all” perspective of what must still, for some, be an experience where the scars have yet to propertly heal.

I know how hard it is to write about the “recent past”. Some time ago I wrote a book (still accessible if you know where to point your browser on the internet) about the first 15 years of the Terrence Higgins Trust, a charity set up to respond to the HIV/AIDS crisis that hit the globe in the early 1980’s. The problem I faced was trying to write about key people in a way that was both interesting and credible.

During an extensive research period I met a good number of them. Many of the early figures in the AIDS crisis were people who were passionate about the cause, and threw themselves into the task of creating an effective response. A tremendous amount of good work was done by these people, and occasionally they fell short. I found it incredibly hard to write a narrative that reflected the good work done, while not mentioning too much of the not-so-good stuff that could well have harmed their reputations in their current fields.

I would not want to repeat that task.

So, the screenwriters of “The Social Network” have my great admiration for their courage and persistence in coming up with a creditable narrative which shows these incredibly rich people in not always the best light, behaving in ways that many of our own leading lights might get their lawyers to prevent us from knowing about.

One of the best things about the film is that is shows the power of the internet – as a force for good as well as for embarrassment. It is clear, from the first few minutes, that Mark Zukerberg knows only too well that the internet can be used to post material that causes embarrassment to others, and shame to the person who posted it. But, and it is a big but, the internet also creates so much pleasure for so many people. Can 500 million users really be wrong? That’s how many registered users there were as of July 2010. I think not.

The users can act stupidly once in a while – but hey, can’t we all. Yet, if faced with a choice between a word without social networking sites and a world with Facebook, I know which one I would go for. Every time.
Posted by Data Protector at 16:12