To engage – or not to engage? 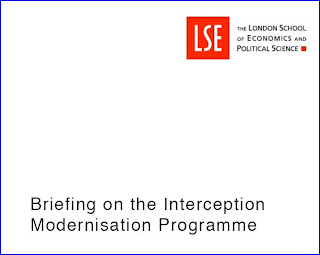 I’ve just read a remarkable briefing paper which was prepared in June 2009 by some awfully clever bods at the London School of Economics. In 59 pages, it brilliantly sets out the challenges the Government faces as it tries to work out what to do ensure that the cops – as well as the spooks – can access our communications records when they need to prevent or detect crime.

If I were a civil servant reading this, I would be worried. Why? Because I would expect to see Government security markings on the document that were so high that even the Home Secretary wouldn’t be allowed to be photographed reading a copy. “How dare stuff like this be allowed to be read and discussed by the great unwashed?” I would expect senior civil servants to mutter.

When in printed form, the truth can hurt. A lot.

But I think we owe a vote of thanks to the LSE’s “Policy Engagement Network” for publishing this briefing paper. Well, thanks to an extent, anyway. Granted, the paper sets out the problems, but what we could really do with is a paper of similar quality which sets out the solutions. Or at least a set of potential solutions, from which the ultimate solution could be selected.

Its website helpfully explains that “the primary objective of PEN is to inform policy deliberation through linking academic research with pressing policy issues. To further this goal we build and nurture relationships with policy-makers, regulators, government agencies, parliamentarians around the world and international organisations. Through these relationships we are able to identify the policy areas that require the greatest and immediate attention. We bring international experts from academia, industry, government, and civil society together to inform our work so that we may bring the key ideas and knowledge into the policy-making process. 'Engagement' is the essential research strategy to our work. We host dozens of workshops every year at the LSE, and we have run forums and conferences around the world. We present our work at dozens of international conferences every year, and regularly give evidence and provide reports to Parliaments, regulators, policy-makers and industry.”

So let’s hope the Government recognises the remarkable contribution to the debate that this briefing paper makes, and cordially invites the authors to join them in their search for solutions. These guys really know their stuff. They obviously have some considerable amount of “inside knowledge” about the salient issues. So let’s leverage it, and hope they are invited to remain within the tent, as it were. Let’s get them to meet Government representatives on a regular basis, to explore solutions that nail the concerns of so many who share their fears about the capacity of the state to properly address this issue.

I think that such an initiative requires a huge leap of faith on both sides.

On the side of the Government, it probably requires some people to realise that they have to extend the circle of the “trusted few”, so that it doesn’t just include law enforcers, communication service providers and solution providers (ie consultants with software and databases to sell). The debate has to hear the voices of the representatives of civil society.

But on the other side, it also requires some people to realise that there is no place for those who just want to be in constant opposition. Opportunities to engage may well lead to an accommodation of views – which will be acceptable to the majority of stakeholders, but never to the extremists on each side of the debate. Does the Policy Engagement Network, like Sinn Féin, have the appetite to reach an accommodation with the Government? Or would it prefer to remain pure to the principles espoused by some those on its fringes?

I have no idea. But I suspect that until the Government is courageous enough to seek its active engagement in any ongoing discussions, the PEN may continue to thrive by criticising the Government’s plans.

Which, I think, is a bit silly. Especially since I am certain that, deep down, the representatives from both sides simply want to ensure that we continue to live in a just, safe and tolerant society.