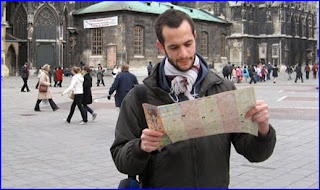 In a quite unusual way, someone has upturned the apple cart. Someone has actually published an article enthusing about location based services. One in the eye for the privacy wonks here. Who is this upstart? And how dare he enthuse about something lots of people can’t wait to trash at the International Conference of Data Protection and Privacy Commissioners, to be held in Israel later in the month.

Still, I suppose you can’t have it all. You have to expect the odd dissenting voice just once in a while. Like from someone who actually gets the concept of the new generation of location based services.

So who is this miscreant and what is it that he’s saying?

Take a look at Benjy Lanyado’s article “ Are guidebooks facing extinction?” which appeared in yesterday’s edition of The Observer. Marvel at the way he describes the way that “Twitter tips, up-to-the minute websites and customised apps bursting with locals' advice are all changing the way we travel.” And how it means the end of the printed guidebooks.

The image above, lovingly ripped off from the Observer, shows travel writer Benji Lanyado in Vienna looking at a map. He doesn’t bother with huge guidebooks any more. As he puts it:

Four weeks ago I visited Manchester on a short break. I took a change of pants and socks, a spare T-shirt and my mobile phone. When I arrived in the city, I told Twitter that I was hungry, and within minutes I was gorging on corned-beef hash thanks to a recommendation from a fellow Tweeter. I held my phone up to Piccadilly Gardens, turned on an app, and its Wikipedia entry flashed across my screen, overlaid on to the grass in front of me through the camera in my phone. I opened another app, and dozens of local suggestions were hovering around me. There was a bar 288m from where I was standing where I'd get a free drink if I mentioned a secret word to a barman called Angus.

About 18 months ago, I started travelling with Twitter. I headed off on assignments without planning a thing. I began in Paris, where I arrived at the Gare du Nord and began slinging questions into the ether. For 48 hours the people of Twitter guided me around the city, from backstreet art galleries in obscure eastern suburbs to glorious belle époque eating halls in Montmartre. Every tip was tailored to my exact time and location. I wasn't recommended any old restaurant for dinner either – I was urged to go to one within a 10-minute walk of where I was standing. I've been on regular “Twi Trips” ever since and am never disappointed with what is recommended… from genteel picnics on Oxford college lawns to transvestite cabaret clubs in Blackpool.

And now my expectations of what the web can do for travel is changing again. The last year has seen the proliferation of location-based apps, tailored to be permanently aware of where their users are. When you open Foursquare, the trailblazer of the new wave, the GPS in your phone tells the app where you are standing and displays dozens of tips within a few minutes of your precise location. It can even tell you who is in them – users are encouraged to "check in" wherever they are in order to accrue points and badges. It's geeky, but it's working – the game element is catalysing Foursquare’s 's exponential growth. The site counted its 3 millionth user in August, less than two months after it passed the 2 million mark. On Yelp, another location-based app, nearby destinations are also rated by users, and you can choose the most popular gallery or bar or restaurant closest to where you are standing.

What once required hours of rifling through guidebooks, or Googling into the provincial nooks of the internet, is now attainable in an instant. And increasingly we don't need to find the information. It can find us.

Having convinced the online public to reveal who they are (through social networking sites such as Facebook) and what they are doing (via Twitter), the web's latest question is significantly more zoomed in: where are you? Location-specific information is what we want, especially when we are travelling. In a survey conducted for the World Travel and Tourism Council, 63% of travellers revealed that they used a mobile map service on holiday, significantly more than any other web service – including social networks, blogs, podcasts and the rest. The number one travel-related search term in the UK is Google Maps, and has been for a long time.

The location apps seem to be feeding from our desire to be more adventurous when we leave our homes. According to Tim Hughes, an internet travel industry expert, after 15 years of online travel being about transactions, "We are moving from answering closed questions – how much for a ticket to New York? – to answering open ones – where should I go next?" It seems we are getting more open to ideas because we know just how many ideas are out there via a few clicks on your phone.

And soon perhaps we won't even have to click. Siri, an app billed as "the personal assistant on your phone" and currently available in the US only, weaves together listings from dozens of services – flight finders, restaurant recommendations, taxi services, live music – and pulls them into a single place. Robert Scoble, an American tech evangelist, ran a blog post in February proclaiming that "if you miss Siri, you'll miss the future of the web". You don't type into Siri; you talk to it. The app gradually learns to understand your voice, and can process multifaceted requests, such as: "Where is a romantic Italian restaurant with a table at 8pm close to where I am?" It even helps you when you mess up your words. When asked to "Take me drunk, I'm home", Siri will order a taxi to arrive at exactly where you are standing.

Not a mention in this article about the evils of data mining – or surveillance, or how bad stuff can happen to people who just want to have fun. I find it so refreshing to read, just once in a while, about the positive side of location based services, rather than about all the countermeasures that need to be put in place to prevent harm being caused to anyone!

Benjy makes a number of other points in his piece too – and to read it all, you can find the article at http://www.guardian.co.uk/travel/2010/oct/03/guide-books-web-travel
Posted by Data Protector at 10:46