Alfred Hitchcock and the current discussions on the Regulation 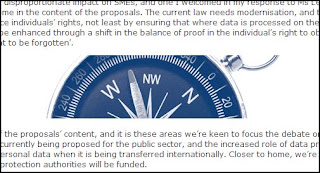 David Smith, the ICO’s sharply dressed Deputy Information Commissioner, always writes an entertaining blog.  His style is very accessible, and readers are usually left with the impression that a few nuggets of advice have been shared with them for the very first time.

David’s latest blog took a closer look at what he considered to be some areas of the data protection reforms that were attracting the most debate. So, what new nuggets were shared this time?

He pointed out that the debate was currently focused on reducing the level of prescription and making it easier for SMEs to comply with the rules. David also pointed out areas of special concern to the ICO - the worry that public sector bodies might be subject to different rules, the fear that the ICO  might have to get more involved in the mess we know as international data flows,  and the (practically silent) debate about who would fund the ICO in future.

Then came some stuff on pseudonomisation.  When people can understand what it is, (a way of disguising identity) the idea is that this category of information will attract lighter obligations for data controllers.  We data protection folk surely need to develop simpler descriptive terms than pseudonomisation. It’s an awful word to spell and I’ve never used it in polite company.  I try hard not to use technical terms that set me apart from regular folk – so any suggestions for a better word would be greatly welcomed.

Am I in a minority in disliking that term? A number of my German friends are very comfortable with it – but then again they are generally comfortable using long words.  For me, the fewer syllables in a word, the better. Pseudonomisation  could easily join that lexicon of data protection terminology that is vaguely familiar, but not one that can be properly described to your mum. Like “privacy by design”.

David usually leaves the best point till last – and this time it was on the timing of any changes. While the European Commission “seems publicly confident that it can do a deal working with the Irish Presidency for a political agreement in June this year.”  David used different language, reporting that the ICO “remain hopeful that an improved Regulation will emerge towards the end of the year.”

Hopeful of “an improved Regulation” is not the same as expressing full confidence that an acceptable measure will emerge during the current European Parliamentary session. But I must not presume to speak for David.

The masterstroke in the blog, however, was the image (pictured above) that accompanied it. What could it possibly refer to?

The compass immediately made me think of “North by North West”, the brilliant 1959 thriller by Alfred Hitchcock. The London edition of Time Out magazine, reviewing the film nearly a half-century after its initial release, commented:

“Fifty years on, you could say that Hitchcock’s sleek, wry, paranoid thriller caught the zeitgeist perfectly: Cold War shadiness, secret agents of power, urbane modernism, the ant-like bustle of city life , and a hint of dread behind the sharp suits of affluence. Cary Grant’s Roger Thornhill, the film’s sharply dressed ad exec who is sucked into a vortex of mistaken identity, certainly wouldn’t be out of place in Mad Men.”

Could these words also describe the people and the tone of the discussions that are currently underway to reach some agreement on the forthcoming changes?