Another one for the naughty step? 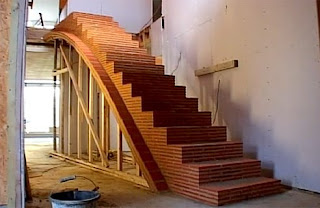 A little while ago I was blogging about various public authorities who had found ways of circumventing the mighty RIPA (Regulation of Investigatory Powers) regime when they wanted communications data from internet and communication service providers.

On 27th March I blogged that the FSA and Ofcom had joined the DWP on the naughty step by seeking to use non-RIPA powers.

I may have found another public authority that finds RIPA inconvenient too, so I’m really glad that I’ve come across this image of a brickwork staircase in construction, as I don’t think that my naughty step is going to be big enough in future to hold everyone who doesn’t want to use RIPA. Paul Sevenoaks and Julian King’s creation has been featured in Channel 4’s “Grand Designs” TV series. I wonder if they might be able to design something similar for me.

I particularly like the cupboard they are building under the stairs – I could easily find a use for that once it’s been bricked in too ...

Anyway, back to the story. Who might I need to name and shame this time? Is it time for the Office of Fair Trading to step forward? Or am I only dreaming?

The anoraks among us will remember that last April, the Home Office issued its consultation paper on the additional authorities it thought had a case for seeking communications data, and naturally it considered that the OFT should be among those authorities. As it explained in its consultation paper, teasingly entitled “Regulation of Investigatory Powers Act 2000: Consolidating Orders and Codes of Practice”, it wanted Parliament to approve a single statutory instrument which set out all of the additional authorities in one document. And in February of this year, Parliament duly obliged. What did the consultation document say about the OFT? Oh yes: “The UK’s consumer and competition authority uses RIPA to investigate
• breaches of competition law and fraudulent and aggressive practices under the Competition Act 1998 and the Enterprise Act 2002, including conducting both civil and criminal investigations into cartels (regarded as amongst the most serious forms of anti-competitive behaviour, causing serious detriment to consumers and legitimate businesses cartels); and
• consumer crime (rogue traders and scams to con recipients with false or misleading claims). UK consumers lose up to £3.5b a year to rogue traders and consumer scams, including bogus lotteries and deceptive premium-rate prize promotions."

And, it was proposed that “Any member of the Senior Civil Service with responsibility for cartels or criminal enforcement would be entitled to demand any information other than traffic information for the purposes of preventing or detecting crime or disorder, or for the economic wellbeing of the UK.”

Don’t see a problem with that.

But what would surprise me is if some oik from the OFT were to decide that, all of a sudden, they wanted to look into the trading practices of a number of websites whose practices may infringe UK consumer protection legislation, and rely on powers conferred under the Regulation 21(1)(b) of the Consumer Protection from Unfair Trading Regulations 2008, and Sections 224 and 226 of the Enterprise Act 2002 to require a communications service provider to make relevant documents available.

“What’s wrong with RIPA?” I hear you cry.

“What’s wrong with RIPA?” I suspect the Home Office (and Sir Paul Kennedy, the Interception of Communications Commissioner) may cry.

“What’s all the fuss, just give us the information!” I suspect the oik from the OFT may reply.

But then again I doubt that the OFT would ever allow a situation like this happen. Once it reminds itself that it has RIPA powers, I’m sure it will decide to rely exclusively on them.

And, in that case, I won’t need to contact Paul Sevenoaks and Julian King to commission a naughty staircase to replace the naughty step that the miscreant additional authorities are presently standing on.
Posted by Data Protector at 10:19