Liberal Democrat Party manifesto 2010: What inspiration for the data protectors? 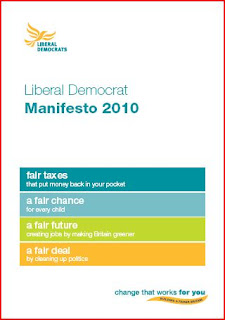 I’ve tried to find commitments in the Liberal Democratic Party’s manifesto to supporting the work of the Information Commissioner’s Office. It’s 112 pages long, so I may have missed some, although it does contain some quite detailed commitments. In a nutshell, there is a degree of respect between those who have issued the manifesto, as pictured in the image on the left, and those who regulate from the People’s Republic of Wilmslow.

Let’s have a quick look at anything that appears in the document that could be of interest to a data protection/surveillance geek.

On cutting crime with more and better police:

We will focus on what works to cut crime ... more police are needed on the streets – to provide a longer arm for the law. And we need to help the police to be more effective at catching criminals, spend less time on bureaucracy and more time preventing crime, reassuring the public and helping keep everyone safe. Liberal Democrats will:
• Pay for 3,000 more police on the beat, affordable because we are cutting other spending, such as scrapping pointless ID cards.
• Reduce time-wasting bureaucracy at police stations with better technology that can be deployed on the streets.
• Turn the National Policing Improvement Agency into a National Crime Reduction Agency with a wider remit to test what policing techniques and sentences work and spread best practice across police services and the criminal justice system.

On practical steps to make you safer:

We will do all we can to prevent crime with practical measures that we know will make a difference and keep people safe. We will:
• Make hospitals share non-confidential information with the police so they know where gun and knife crime is happening and can target stop-and-search in gun and knife crime hot spots.
• Require better recording of hate crimes against disabled, homosexual and transgender people, which are frequently not centrally recorded.

On fair and local politics, protecting your freedom:

Britain’s hard-won civil liberties have been eaten away ... we will introduce a Freedom Bill to restore the civil liberties that are so precious to the British character.

• Introduce a written constitution. We would give people the power to determine this constitution in a citizens’ convention, subject to final approval in a referendum.
• Strengthen the Data Protection Act and the Office of the Information Commissioner, extending Freedom of Information legislation to private companies delivering monopoly public services such as Network Rail.

On restoring your freedoms:

Liberal Democrats believe it is an individual’s right to live their lives as they see fit, without discrimination, with personal privacy, and with equal rights before the law. Decades of Labour and Conservative rule have overthrown some of the basic principles of British justice and turned Britain into a surveillance state.

Liberal Democrats will protect and restore your freedoms. We will:
• Introduce a Freedom Bill. We will regulate CCTV, stop councils from spying on people, stop unfair extradition to the US, defend trial by jury, and stop children being fingerprinted at school without their parents’ permission.
• Restore the right to protest by reforming the Public Order Act to safeguard non-violent protest even if it offends; and restrict the scope of injunctions issued by vested interests.
• Protect free speech, investigative journalism and academic peer reviewed publishing through reform of the English and Welsh libel laws – including by requiring corporations to show damage and prove malice or recklessness, and by providing a robust responsible journalism defence.
• Scrap intrusive Identity Cards and have more police instead, and also scrap plans for expensive, unnecessary new passports with additional biometric data.
• Halt the increase in unnecessary new offences with the creation of a ‘stop unit’ in the Cabinet Office. Every department in Whitehall would have to convince this unit of the need for a new offence.
• End plans to store your email and internet records without good cause.
• Remove innocent people from the police DNA database and stop storing DNA from innocent people and children in the future, too.
• Ensure that everyone has the same protections under the law by protecting the Human Rights Act.
• Scrap the intrusive ContactPoint database which is intended to hold the details of every child in England.

We believe that the best way to combat terrorism is to prosecute terrorists, not give away hard-won British freedoms. That is why we will:
• Reach out to the communities most at risk of radicalisation to improve the relationships between them and the police and increase the flow of intelligence.
• Scrap control orders, which can use secret evidence to place people under house arrest.
• Reduce the maximum period of pre-charge detention to 14 days.
• Make it easier to prosecute and convict terrorists by allowing intercept evidence in court and by making greater use of postcharge questioning.

There’s quite a bit of meat here – more meat than in the manifestos of either the Labour or the Conservative Party.

But let’s see how these commitments are managed in future. It’s not what you say, it’s what you do that counts.

Those that want to will, I’m sure, point their browser in the direction of http://www.libdems.org.uk/our_manifesto.aspx
Posted by Data Protector at 05:49