Labour Party manifesto 2010: What inspiration for the data protectors? 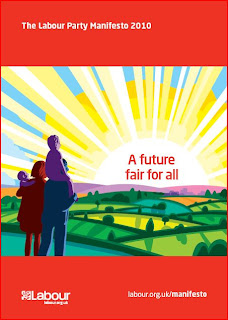 I’ve tried to find commitments in the Labour Party’s manifesto to supporting the work of the Information Commissioner’s Office. Actually, I can’t find many. Perhaps they are just getting their own back for being damaged by the great Parliamentary expenses scandal of recent years. After all, if Richard Thomas hadn’t tried so hard when he was the Information Commissioner, many of us would still be unaware of just what parliamentarians have been spending public money on. Now the cat’s well and truly out of the bag, there can’t be much love lost between those who seek to govern the promised land, as pictured in the image on the left, and those who regulate from the People’s Republic of Wilmslow.

Anyways, let’s have a quick look at anything that appears in the document that could be of interest to a data protection/surveillance geek.

On using technology to cut crime:
We will continue to make full use of CCTV and DNA technology: new weapons deployed to strengthen our fight against crime. We are proud of our record on civil liberties and have taken the DNA profiles of children off the database and tightened the rules around the use of surveillance – but we are also determined to keep our streets safe.

CCTV reduces the fear of crime and anti-social behaviour. We have funded cameras in nearly 700 areas, and brought in a new power for people to petition their local authority for more CCTV.

Advances in DNA technology have been critical in solving serious crimes – last year alone there were 832 positive matches to the DNA database in cases of rape, murder and manslaughter. Labour will ensure that the most serious offenders are added to the database no matter where or when they were convicted – and retain for six years the DNA profiles of those arrested but not convicted.

The new biometric ID scheme which already covers foreign nationals will be offered to an increasing number of British citizens, but will not be compulsory for them. It will help fight the growing threat of identity theft and fraud, as well as crime, illegal immigration and terrorism. In the next Parliament ID cards and the ID scheme will be self-financing. The price of the passport and ID cards together with savings from reduced fraud across the public services will fully cover the costs of the scheme.

On Terrorism and organised crime:

Our counter-terrorism approach is one of the most sophisticated in the world, and investment has trebled since 2001, with thousands more counterterrorist police and a doubling of security service numbers. We will continue to give the police the tools they need to fight terrorism while giving Parliament and the courts oversight to ensure these powers are not overused. We will develop our Prevent strategy to combat extremism.

We will continue to make Britain a hostile place for organised criminals, harassing them with asset seizures, tax investigations and other powers; strengthening the Serious Organised Crime Agency and encouraging police forces to cooperate across force boundaries and international borders; and responding quickly to new threats including cybercrime.

And that’s it. Nothing about strengthening the powers of the ICO, or the databases that have caused some media interest recently.

If anyone can find anything else, please let me know. Their full manifesto can be found at http://www2.labour.org.uk/manifestosplash?gclid=CLPLiKbMjaECFVBc4wodwTNINw
Posted by Data Protector at 05:34