BigBrotherWatch: their manifesto for the next Parliament 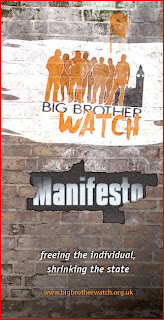 It’s general election time, so its a great opportunity for like minded folk to set out their stall and explain to the general electorate just what it is that they will be doing, or campaigning for, in the coming years.

So full marks for the siblings at BigBrotherWatch, who have just launched their manifesto, full of bright ideas lovingly borrowed from their chums at No2ID and Privacy International.

I know they’re not actually standing in any of the seats. But who said you had to contest an election before you were entitled to make your views known?

And full marks for developing a document that’s also a really easy read. When you print it off, the printer just spurts out 2 pages. No need for the reams of paper wasted when trying printing off the alternative versions from the major parties.

So what do we have here?

The campaigning work is set out into three main areas, and in each area the siblings explain what they would like to achieve within 3 months, what should be achieved in the first year, and what could be achieved within 5 years.

And, very cleverly, they restrict their activities to 3 areas, those which relate to privacy, liberty and surveillance.

Let’s look at some examples:

• ContactPoint, the database of British children, will be scrapped,
• Any official forcing entry to a home must have a warrant
• The intercept modernisation programme, intended to monitor and log our internet and phone use, will end [Woops! they must have missed my blog of 23 January, which drew attention to its new name. Arguably, the IMP has already ended!]

Within the first year

• End use of Detailed and Summary Care Records (the“spine”),
• Have a significant reduction in the number of people entitled to enter private property and powers which allow council officials to enter the home
• End the roll-out of full-body scanners at UK airports, and allow alternative forms of search for those who choose it

• Introduce far greater control over confidential medical records, limiting number of non-medical personnel with access
• Ensure EU police databases are secure [This is a really good idea - only yesterday "The Register" reported that it had mistakenly been sent an unencrypted file containing the full names and dates of birth of 10,006 people in jobs or applying for jobs where a Criminal Records Bureau disclosure is required. It detailed the results of the checks going back to 2001 and identified 863 people as having been in trouble with police. In many cases it recorded their occupations, including dozens of taxi drivers, school and hospital workers. Someone from Gwent Police probably needs a new pair of trousers.]


In the area of liberty, within 3 months

With the first year

• Devise a European Freedom of Information Act and Data Freedom Act, so we can know more about what the European Parliament is doing and know what the EU has on file about us


And finally, in the area of surveillance, within 3 months

• End the obligation on Internet Service Providers and Telephone Companies to retain information on subscribers and supply it to government
• A commitment to not introduce “pay-as-you-throw” legislation, opening the door for the activation of bin microchips
• Any Council use of RIPA to require a Councillor’s sign off

Within the first year

• Bring far greater transparency to the ANPR system, the technology used to record the numberplates of vehicles in this country, which generates significant revenue for the state. [Today's "Daily Mail" reports that the number of cameras has increased from 1,935 in 2000 to about 6,000 today. In total, 16 million tickets have been issued since 1997, raising £913 million. Of course, this has helped road deaths fall to 2,943 in 2007, the lowest since records began in 1926, but it still seems like a lot of money. The Daily Mail report co-incidentally includes a quote from Jennifer Dunn, policy analyst at the TaxPayers' Alliance, whose founders helped create BBW.]


So there it is. I’m not going to place any money on a televised debate between Matthew Elliot, BBW’s Chief Executive and the other party leaders during this general election, but it’s going to be useful to see which of the other parties who manage to form the next Government associates themselves with any of these policies. The siblings have set out their stall, now we can wait and see what gets implemented during the course of the next Parliament.

For those that wish to, here’s the link to take a closer squint at the manifesto: http://www.bigbrotherwatch.org.uk/manifesto.pdf
Posted by Data Protector at 01:18