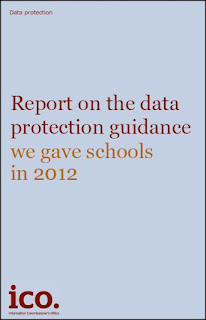 Regular readers of the ICO’s website will have probably have already read the recently released report which aims to help schools ensure they are handling pupils’ personal information in-line with the law.

It was prompted by a survey of 400 schools across nine local authority areas.

Louise Byers, ICO Head of Good Practice, helped draft the report: “The survey results showed that whilst awareness of the law was broadly good, knowledge on how to comply with it wasn’t always there. In many respects that should come as no surprise – it’s not teachers’ area of expertise – and it is precisely what our report is aiming to address.

“I’d urge teachers and heads to take a look at our recommendations and make sure they’re complying with the law. The sensitive personal data that schools handle means it is crucial they get this right, and we hope the ICO’s report will help them achieve that.”

I thought I would do my bit to encourage schools to read it.

And what could be worse, than attempting it in verse?

So, in honour of the everso helpful Louise, here goes:

If you’re a school
Then, as a rule
You’ll appear a fool
If you ignore our latest tool

Of it having gone all wrong
And us coming along
And see just how strong
Your standards really ... weren’t

We’re not trying to be meaner
Honest