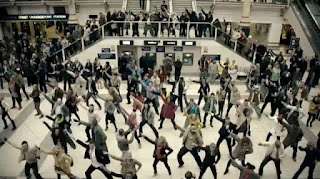 The smarter eyed Londoners would have witnessed a none-too familiar scene yesterday – a flash mob of data protectors on the move around London.

The mob assembled at the offices of Hunton & Williams in the Gherkin for breakfast. It stayed to attend the IAPP’s Knowledge Net, and heard sessions on complying with the Bribery Act and Money Laundering Requirements- is this compatible with Data Protection Law. Then, after morning coffee, considered whether anyone ever read privacy policies, and discussed how to be transparent in practice if no-one wants to read the messages.

Most of the mob remained for a really good lunch, before a group splintered from this crowd and ambled over to the offices of Bird & Bird for an afternoon session on pressing data protection issues. This session was apparently very well received too, (as was the B&B afternoon tea).

The remnants of the mob assembled at the Cinnamon Club later in the evening, having booked a set of tables under the name of the Privacy Officers’ Supper Club, to review what had happened during the day, and to explore the amazing dinner menu. It was here, in the comfort of this grand Westminster establishment, that wonderous tales were told of amazing data protection stories. None of these stories will ever be repeated outside the walls of the Cinnamon Club – what goes on between members of the data protection flash mob stays with the members of the flash mob.

Members of the flash mob are likely to assemble next week for events organised by the Privacy Partnership, Pinsent Masons, Privacy Laws & Business, Linklaters, Speechly Bircham, and Act Now Training. And those are just the ones I’m allowed to mention today.

And yes, before the detractors pile in and comment that data protectors are spending far too much time talking about data protection, and not enough time actually doing any of it, let me remind you that this is not the case. It’s important for all stakeholders to appreciate just what is going on in order that they can offer the best, most cutting edge advice, to their clients, safe in the knowledge that they share a common ethical approach to the broad issues of the day.


Source:
Details of forthcoming privacy events are published on my website at http://www.martinhoskins.com/privacy-events/ while an archive of events reminds you what you may have missed. I can’t guarantee that any of these forthcoming events will be graced with a performance by members of the flash mob, though.