Will the Commissioner get hit by a custard pie tomorrow? 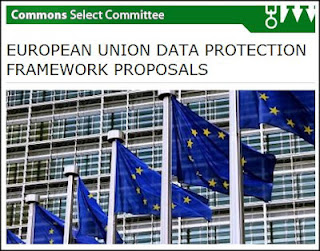 On Tuesday morning, the eyes of the data protection world will be focussing on events unfolding the Wilson Room in Portcullis House, Westminster.

The Justice Select Committee of the House of Commons will hold its first evidence session in its inquiry into the EU’s data protection framework proposals.

The warm up acts will get going around 10.30am, when Ian Readhead, Director of Information, Association of Chief Police Officers, and Merilyne Knox, Head of Public Access Office, Metropolitan Police, will be questioned on the considered views of the law enforcement community. That won’t take long. Twenty five minutes later, Jean Gonié, Director of Privacy EU Affairs, Microsoft, and Sietske de Groot, Senior EU and International Affairs Policy Adviser, Federation of Small Businesses, will occupy the witness seats. They just get 35 minutes.

Then, at 11.30, everyone gets ready to hear from the main men. Yes, for 60 minutes, Christopher Graham, Information Commissioner and David Smith, Deputy Commissioner and Director of Data Protection, get to answer questions put by Committee members without hesitation, deviation, or repetition on some of the most important issues of the moment.

It’s going to be fun. But don’t worry if you can’t get there yourself. It ought to be broadcast live on Parliamentary TV, and a recording of the session will be available for posterity.

I don’t think it’s going to be one of those “custard pie” sessions – you know, where an aggrieved member of the general public becomes so incensed with the evidence given by the principal witness that they try to toss a custard pie in their face. This has happened before - in that very same room - remember what Rupert Murdoch got from Jonnie Marbles when he kindly agreed to share some of his views with politicians in Portcullis House on 19 July 2011. And remember how brilliantly his wife, Wendi Deng had reacted: “with an open palm, she brought down a blow hard and with full fury on to Marbles' head, just as if she was spiking a volleyball.”

I wonder whether Christopher Graham's wing man, David Smith, has been taking any self-defence lessons – after all, Tuesday just might well be his Wendi Deng moment.

Seriously, I hope the Committee gets something out of this session. It ought to give the Commissioner the opportunity to tell the Committee what we all know already (after all, we’re all ICO disciples and all have eagerly devoured every comment that has ever been made by any ICO official about this initiative). But I hope Christopher Graham gets the opportunity to offer some new material too. It would be nice for him to be asked, if he explains that the current proposal is actually too expensive to implement within a reasonable period of time, to set out just what level of investment within what time period ought/could be made by data controllers to improve their current standards.

I also hope he gets the opportunity to make the point that it’s unfair for so many commentators to criticise his officials for failing to be sufficiently proactive in so many areas at a time when he is starved of the resources that are really required to meet the obligations that are imposed on him. His office may, in relative terms, be better resourced than many of the Information Commissioners in the rest of Europe, but is that really sufficient? I think not.

Perhaps, he will need to reduce public expectations about his public role so that the public understand why bad stuff continues to happen. Like spam, mistakes on credit files and data breaches. Why should the ICO be blamed for a series of events that they can’t control, or effectively police? All I tend to hear is that “something must be done” and that “the ICO” must do it, but without any proper discussion about how the resources will be provided (or reallocated) to enable it to do it properly.

I’ll probably be in the audience. But I most certainly won’t have a custard pie in my pocket.

Source:
This link also provides a link to a video of that awful event in July 2011: http://www.telegraph.co.uk/news/uknews/phone-hacking/8648659/Rupert-Murdoch-hit-by-custard-pie-Wendi-Dengs-volleyball-spike.html